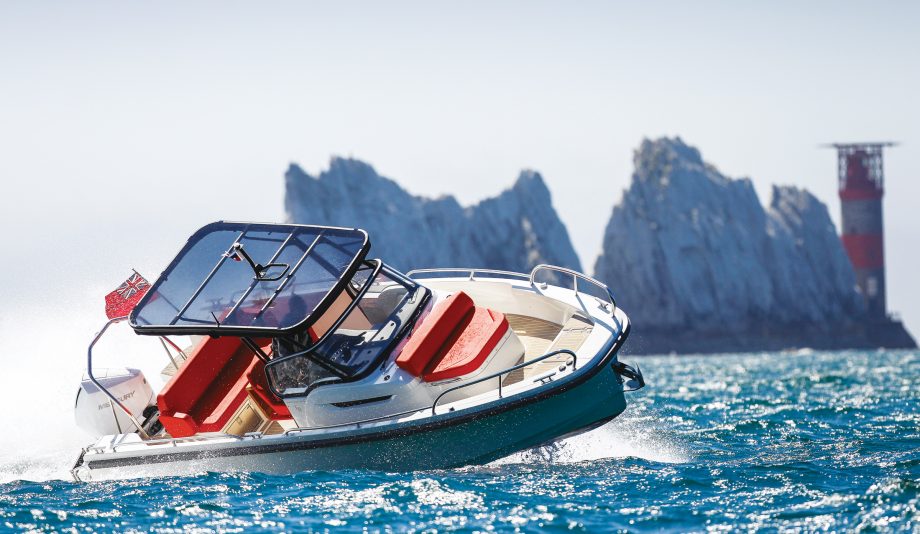 The third and smallest model in Nimbus’ outboard sportsboat range could actually be the best of the bunch, judging from our lively sea trial...

Of all the W, T, C range of Nimbus sportsboats, the new T8 is the one we were most looking forward to testing. It may be the smallest of the bunch at 26ft 9in (8.15m) long but with up to 300hp hanging off the transom and a very tidy-looking twin step hull, it should also be the fastest and most agile.

Two other factors make it of particular interest to sportsboat fans; it’s considerably more affordable than the other models, with a starting price of £87,142, and it’s trailable. Just.

You’ll need a braked twin-axle trailer and a car with a towing capacity of around 3,500kg but its maximum beam of 2.6m sneaks under the EU’s limit of a 2.3m- wide trailer with up to 30cm overhangs on each side. The Axopar 28, at 2.95m, doesn’t.

So it’s small enough to tow on the road if you want to explore further afield or store it in a shed over winter, it’s powerful enough to pull water-skiers and wakeboarders, yet it’s also spacious enough to serve as both a party platform for day guests and a comfortable overnighter for a couple thanks to a good-sized cuddy cabin with a separate heads compartment and a permanent double bed.

It sounds almost too good to be true but does it actually deliver as much as hoped out at sea?

First impressions do nothing to pierce that bubble, quite the opposite. Both the design and the build quality only serve to reinforce the feeling that the T8 has been created by people who really understand boats.

It’s an exceptionally safe, easy craft to move around with deeply bulwarked decks, sturdy guard rails, grab handles exactly where you’d expect to find them and an attention to detail rarely found on this size of craft.

All the mouldings are smoothly finished inside and out; the locker catches and hinges are built for a lifetime of abuse, and deck hardware, such as the cleats and optional A-frame, appear to have been stolen from a 40-footer.

Even the tiny things like the loops in the anchor locker to hang your bow lines from speak volumes about the thought that has gone into it. Then there’s the cockpit with its clever aft bench that can be configured to face forward, tilted to make an aft-facing lounger or folded flat to create a sunbed. The mechanism for this is far better engineered than the vastly more expensive F//Line 33’s.

Flip up the folding teak table and swivel the helm seats and you’ve got a sociable dinette with a 30-litre drawer fridge close to hand. You can even specify an outside gas hob for the full al fresco dining experience.

If there is a criticism it’s that the full walkaround decks limit the shape and width of the seating and therefore the number of people you can sit in the cockpit – it’s RCD rated for eight but unless you’re happy to have people sitting up front or perched on the aft-facing transom bench under way, there are only enough seats for five or six at a pinch.

Perhaps a W8 will come along later with a larger L-shaped seating arrangement – a C8 is already in development. The helm is almost completely beyond reproach with a pair of bucket seats that slide fore and aft, flip up to make a bolster and provide grip and support in all the right places. The only slight niggle was the sharp corners of the sliding mechanism, which stuck out just far enough to scratch the back of my legs.

Foot supports and cup holders are provided for both helm and navigator as well as a recess for storing shades, phones and wallets. The relationship between seats, wheel and throttle is bang on and so long as you don’t mind having all your engine and navigation information presented on a single MFD (there are no analogue dials), it’s wonderfully clear and uncluttered.

Thankfully, Nimbus has seen fit to provide hard switches for the most frequently used items, such as wipers, lights and pumps. Again, only two minor grumbles to report; I found that when leaning against the bolsters (but not when sitting or standing) the top of the windscreen frame was directly in my eye line.

And the optional T-Top, while admirably rigid, caused a slightly irritating whistle from the apparent wind when planing. As for the hull itself, it’s fast (45.8 knots), efficient (1.67 lpm at 20 knots) and capable, but it’s not the grin-a-minute RIB-eater we’d hoped it might be. It performs beautifully in a steady surface chop and cuts pretty well through bigger lumps and bumps when kept on the straight and level but it lacks the agility and magic carpet ride of a Windy Solano or Cormate T27.

Cut across a wake at the wrong angle or push too hard into a messy head sea and you’ll pay for it with the occasional heavy landing. The hull feels solid enough to take it and the flared bow does a fine job of keeping spray away from the helm and preventing the bow from stuffing but it’s not as soft-riding as an Axopar 28.

Blame the wider chine flats near the bow needed to accommodate that cuddy cabin and take comfort from the fact that your fellow Axopar driver has to make do with a separate heads compartment in the centre console and a much smaller optional sleeping cabin tucked under the aft sun pad.

The sportsboat buyer is truly spoilt for choice at the moment and the new T8 is only going to make that decision harder. It boasts all the usual Nimbus traits of thoughtful design, top notch build quality and a surprising level of comfort and practicality at a price that undercuts its premium rivals from Windy, Cormate and Chris-Craft.

It’s not the sharpest handling hull in the market but it’s a very safe and stable one that still offers 45-knot performance, a 100nm range and comfortable overnighting facilities. And the fact you can trail it is the icing on the cake. As the consummate all-rounder, it’s a very convincing package.