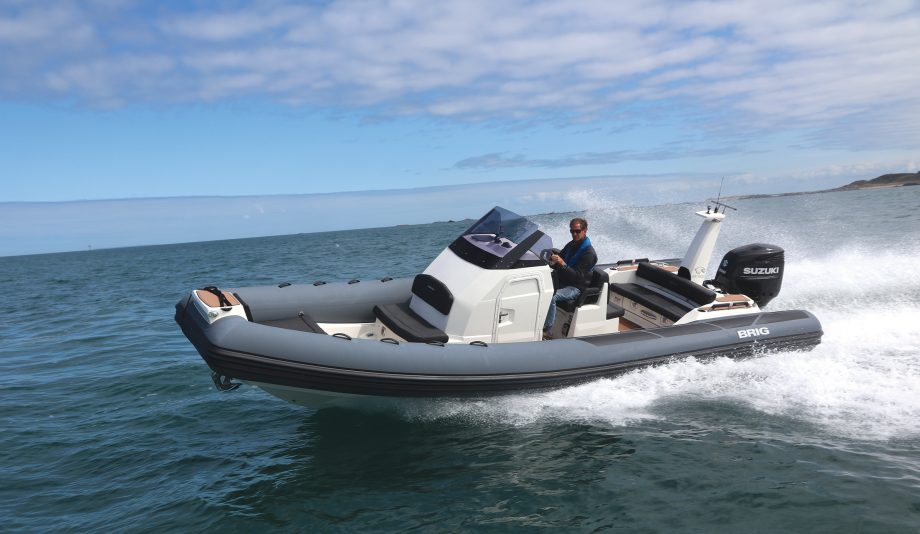 BRIG isn’t just the best-selling RIB brand in Europe, it is also the largest RIB manufacturer in the world – not bad for a Ukrainian company that emerged 25 years ago from the ashes of a former Soviet fighter jet factory.

So when it launches a new 8m model aimed squarely at the family leisure cruising market rather than the high-performance niche which British RIB builders tend to favour, it’s worth taking a closer look.

The Brig Eagle 8 is a handsome-looking craft. The iconic but dated radar arch and GRP end caps that used to identify the previous generation of BRIGs have gone to make way for sleeker, classier styling that could pass for a superyacht chase boat costing two or three times as much.

The large diameter hypalon tubes have a matt-effect textured finish as standard, while a fully moulded GRP deck with integrated seating that wraps around the stern makes it look and feel more like a high-end sportsboat than a utilitarian RIB.

Even the detailing cuts a dash, with rectangular section grab rails wrapped in matching hand stitched fabric and stainless steel cupholders recessed into both the helm console and transom bench armrests.

The layout is equally well thought out with a pair of comfortable bench seats facing each other across a removable table that stows away in a dedicated slot in the transom locker when not in use.

More seats in the bow can transform into a large sunpad, making clear that this is a boat designed to be just as enjoyable at anchor as it is under way.

And most importantly of all there’s a really generous heads compartment under the centre console that doubles as a handy dry storage area for everything from cushions to inflatable tenders.

So far so good, but if it drove like a floating caravan all that good work would soon be undone. Thankfully it doesn’t and the Eagle 8 is still a very capable RIB at heart.

The Suzuki 300hp engine (the new 350hp with counter-rotating props is also an option) is still one of the quietest engines around, especially at idle when you genuinely have to check whether it’s running or not, but stir it into action and it delivers the kind of effortless performance you’d expect of a big RIB.

It’s not the fastest or even the softest riding RIB we’ve encountered at this size but it feels immensely safe, stable and sturdy. Because the tubes are nearly always in contact with the water both at rest and at speed, and the underwater hull sections extend beyond the transom either side of the outboard leg like a pair of fixed trim tabs, it stays remarkably flat and level regardless of crew numbers or cross winds.

Neither of the boats I tested had adjustable trim tabs and never once did I miss them. Despite these oversized tubes, which help maintain a very dry as well as stable ride, the hull gripped remarkably well through turns with no sign of the tubes levering the keel out of the water. Over one particularly tall, steep ferry wake, it did land quite heavily but nothing flexed, creaked or groaned in the slightest.

The helm set up is close to perfect with a wraparound frameless windscreen providing good protection without compromising visibility and a bench seat with split cushions that allow the helmsman to stand while the navigator sits, or vice versa.

My only slight gripe is that the wheel and throttle feel a little too high when seated. Thoughtful touches include twin bilge pumps with separate switches adding redundancy as well as capacity, and a voltage sensitive relay switch on the dual battery set up that locks out the starter battery when the engine isn’t running but links them both for charging under way.

The Eagle 8 may not be the sharpest performer we’ve ever driven but it is an exceptionally capable and well designed family cruising RIB at a price that’s hard to ignore. No wonder BRIG is doing so well.