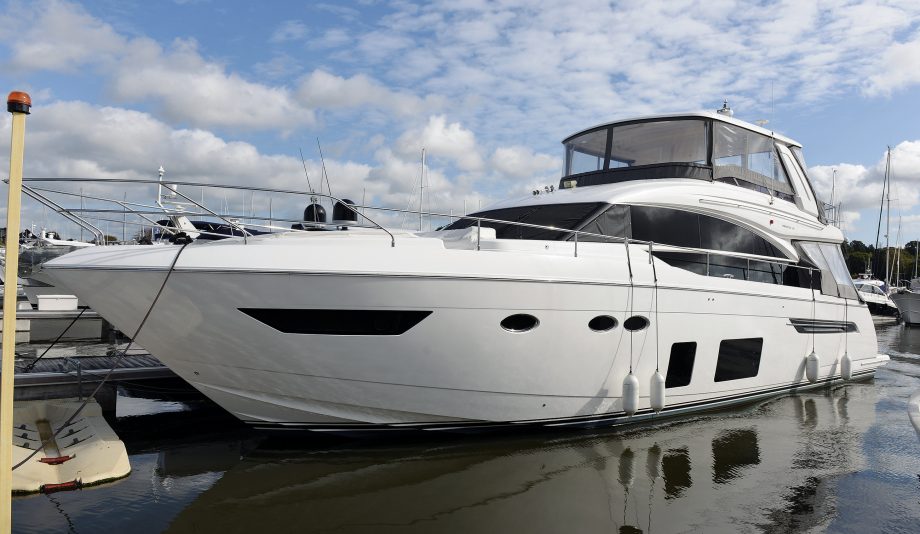 Our resident used boat expert Nick Burnham explains how to find a good Princess 68 on the secondhand market.

It’s always fascinating to watch new concepts in motor boats evolve and become de rigueur. Back in the 1980s we were introduced to transom doors – today the idea of scrambling over a cockpit coaming to get aboard seems absurd.

In the 1990s manufacturers stopped asking us to climb ladders to reach the flybridge and stairs became the “why did no one think of this earlier?” route to the top deck, while extended bathing platforms became the obvious solution to tender storage instead of hanging them from big ugly metal davits and hand-winching them into the sea.

The Noughties saw lower decks transformed from caves into bedrooms via the magic of large hull windows instead of tiny portholes, and those extended bathing platforms gained mobility, lowering gently into the ocean to float off your tender instead of having to hoick it off with a passerelle or a crane.

It’s hard to find fault with the Fairline Targa 62, an old-school sportscruiser that goes like a dream

When the years hit their teens, aft-galley layouts for deck saloon boats were ushered in across the board, plus massive saloon windows and foredeck cockpit areas. And if future marine historians need to point to a boat that encapsulates all of these elements, they could do a lot worse than choose a Princess 68. Launched in 2014, the 68 ticked every box.

It was a world-beating sub-70ft cruiser and it was love at first sight for Mark Clare and his family. Having started their boating career in 2006, they’d risen quickly through the ranks.

It was at the Southampton Boat Show that they viewed the brand new Princess 68. “We walked on board and were immediately blown away by the space,” explains Mark.

“We’d previously looked at a Princess 72, which has its galley in the centre of the main deck breaking up the layout, but the 68 has the galley aft and the space just flows forward in one continuous unbroken sweep right up to the windscreen.

“Add to that the huge windows either side, so big that they disappear down behind the settees, and the effect is remarkable. In fact I was initially slightly concerned about the integrity of so much glass as it was a relatively new concept, but Princess assured us that the design had been thoroughly tested. We’ve had no issues with it and the concept has been extended across other models, so clearly neither did anyone else.”