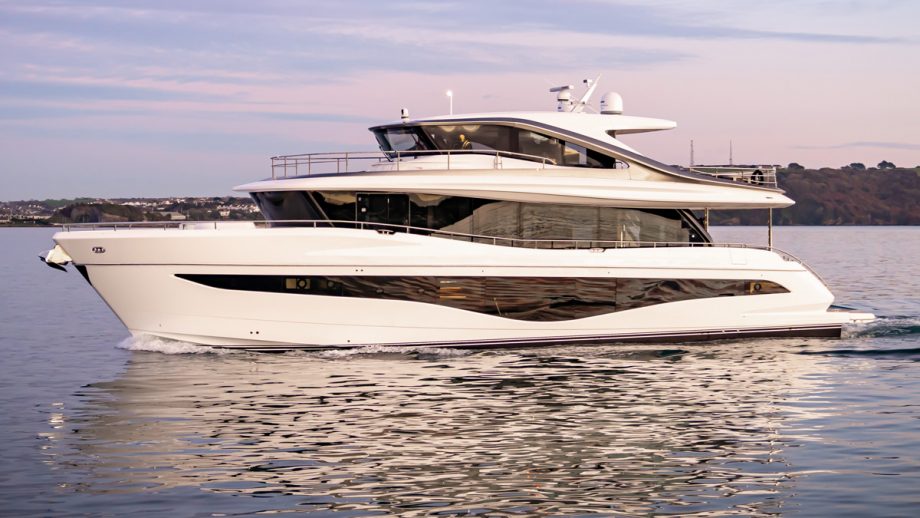 Weighing in at around 72 tonnes with a half load and measuring just over 80ft LOA, the X80 was designed by Princess Yachts, Olesinski Design and Pininfarina, with the same principles in mind that made the Princess X95 flagship such a runaway success.

Key to the Princess X80’s appeal is the semi-enclosed top deck which incorporates the helm station at its forward end and a sky lounge that leads out to an aft deck complete with a large dinette, wetbar and two low-slung seating areas furthest aft.

Side doors in the sky lounge give access to a spacious raised sunbathing area on the same deck, situated forward of the wheelhouse.

With the helm up top the living space on the main deck can extend right forward to the windscreen with an elegant staircase linking the two decks internally.

The area at the forward end of the deck, which is flanked by glazing on three sides, is a wonderful dining and entertaining space in the standard layout but as an option can be home to the owner’s cabin with private access to the foredeck via floor-to-ceiling patio doors on the port side.

Not only would that be pretty special for the owner but it would add an extra cabin to the lower deck’s four guest and two crew cabins.

There are two MAN V12 engine options available with even the smaller of the two good for an estimated 28 knots flat out.