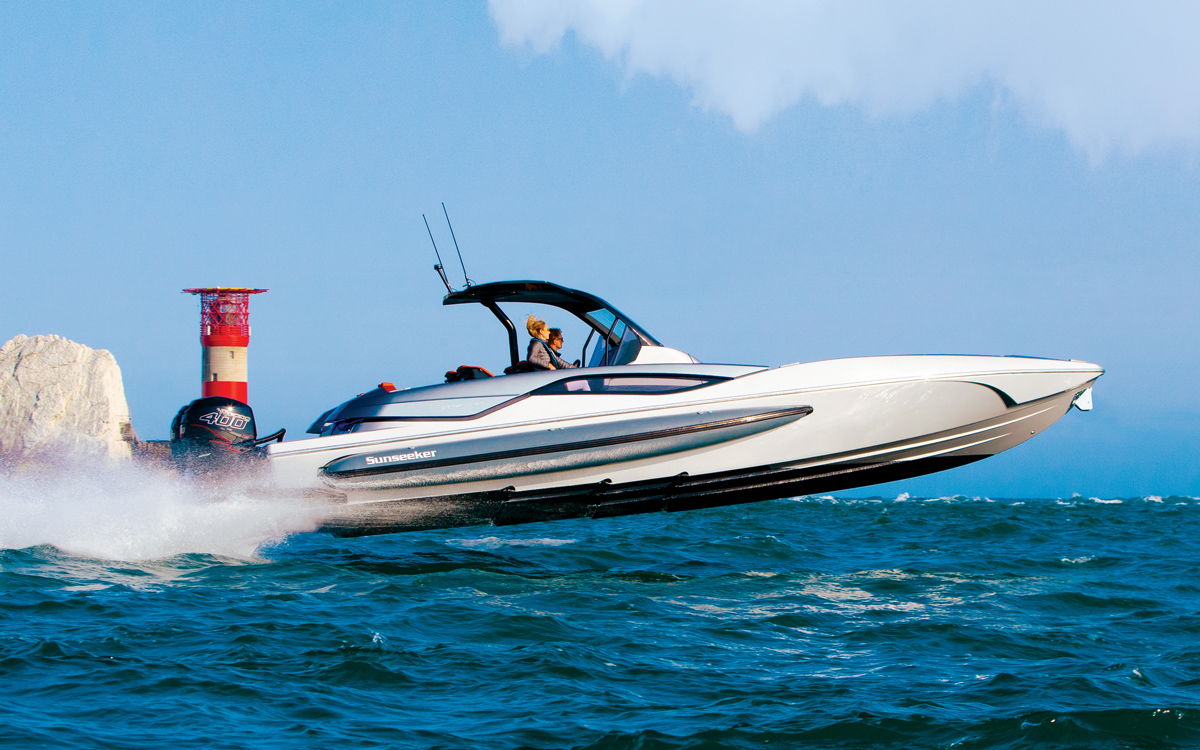 It's almost 20 years since the British yard launched a proper performance boat. Has the Sunseeker Hawk 38 got the pace and the seakeeping to rekindle the glory days?

Alum Bay, Wednesday 5 June. A fresh Force 4 is blowing through the Solent from the south west, kicking up the usual messy chop. The Sunseeker Hawk 38 we’re in is lapping it up, skipping over the wave tops at 50 knots, the supercharged howl of the twin 400hp outboards accompanied by the staccato ratta-tat-tat of hull chines kissing water.

The closer we get to the Needles the larger the waves become and the further the Hawk starts to fly. Sunseeker’s skipper, an experienced offshore racer, is starting to work the throttles harder now, whipping them all the way back and forth like a conductor’s baton, urging his piston-powered orchestra to raise the tempo up a notch.

Timing is everything in this game. The aim is to keep the hull skimming flat and fast by throttling back as the propellers leave the water then slamming the power back on a fraction of second before it lands to reduce the stress on the gearboxes. His ability to read the waves is uncanny, and his hand speed dizzyingly fast.

I had been looking forward to driving Sunseeker’s fastest boat for almost 20 years; now I’m getting nervous. I’ve already piloted the prototype of this very boat at 68 knots without the slightest wobble. But that was on Lake Como in conditions so benign I could have sailed a paper boat across it. This is different. This is the Solent with winds, waves, tides, overfalls and large pointy rocks. At speeds over 50 knots things happen very quickly.

I remind myself that the Hawk 38’s target market is not experienced offshore racers but ordinary power boat owners in search of the ultimate fast day boat. People like me in other words, albeit with a lot more money – at £642,000 inc VAT this is not for the faint-hearted nor light of wallet.

Read the full review of the Sunseeker Hawk 38 in the August 2019 edition of Motor Boat & Yachting.