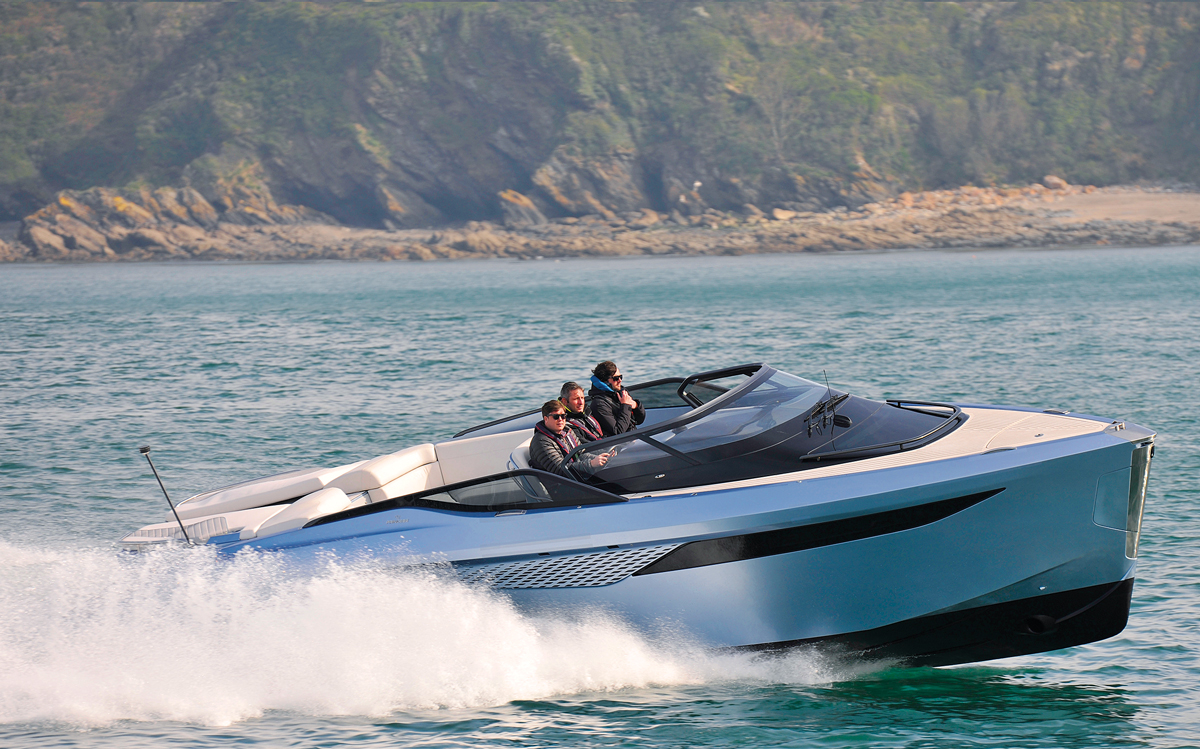 We’ve had to be patient but the time has finally come to take to the water on the most radical boat that Princess Yachts has ever made, the R35. Has it been worth the wait?

A text message to the editor after a test is not rare, just a quick line to reassure him everything has gone to plan and I haven’t accidentally run the boat in question up the nearest sandbank. The summary sent to him after the test of this boat, though, was the most succinct yet: “The R35. Holy sh*t!”

Though we have tracked this boat’s gestation from spy shots to a drive of the pre-production mule, nothing – and I mean nothing – could have prepared me for what it would be like to experience the real thing. The R35 prototype stole my breath with its rawness, agility and aggression, but the end product did so because of the way it masks this awesome capability beneath Pininfarina’s sumptuous lines and Princess’s cool refinement.

What’s most remarkable about sitting in the cocoon of a helm seat is that everything looks so familiar, there is no obvious clue that there is such technical wizardry underneath, nor that this machine is 100% carbon fibre and smuggling a pair of thumping 430hp petrol V8s in the enginebay.

There are Volvo Penta throttles, a joystick, a compass and a pair of screens that display navigation and engine information. Fire up the motors and there is a muffled bark followed by the chesty rumble that only a V8 can make.

Nudge the joystick and the note deepens as the computer juggles the sterndrives to move it sideways off the dock, 860hp naturally aspirated horses straining at their tethers. Swipe a finger across one of the MFDs and a screen reveals the wizardy at work beneath the boat. T-shaped carbon fibre foils deploy from the bottom of the hull just aft of the cockpit seating as soon as the engines fire up. Not that you would know, you don’t have to worry about retracting them for berthing, so benign is their effect at slow speeds.

As the revs increase and water begins to flow across their vanes, the boat comes alive in my hands. It responds to speed, hungry for more revs that feed the foils and lift the stern, forcing the narrow forward section of the vee-shaped hull to cleave the surface of the water.

There’s another reason to carry speed; at displacement or low-planing speeds the dug-in bow can chuck a fair amount of water up to be caught by the wind and lashed through the cockpit, but when the pace is increased the aero effects comes into play and keep spray clear of the decks.

Read the full review in the July 2019 issue of Motor Boat & Yachting.

The car manufacturer’s first ever boat is a remarkable achievement, but has the Aston Martin AM37 got what it takes