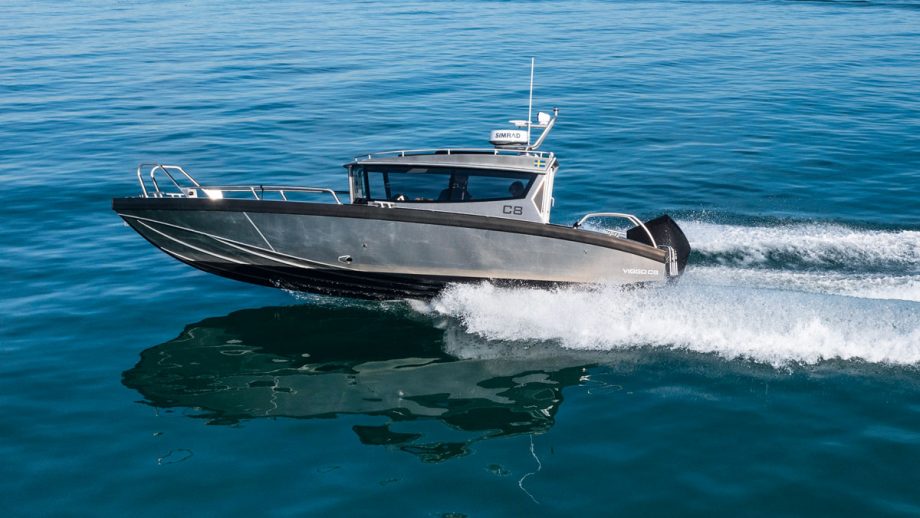 Remember Anytec and its 747? Well, the team behind that are back with a new name and an equally focussed and ferocious all-aluminium speed machine, the Viggo C8. Is this all-aluminium Swede the toughest sub-30ft boat on the market? Motor Boat & Yachting deputy editor Jack Haines takes a test drive with a C8 owner to find out...

There is no shortage of options if you are looking to upgrade from an open sportsboat or RIB to something more weather resistant with year-round usability, most of which hark
from Scandinavia.

Botnia, Nord-Star, Sargo, Nimbus, Axopar and XO – to name but a few – all build capable 25-30ft craft with fully enclosed wheelhouses, many with outboard propulsion. So why opt for a Swedish brand that the vast majority of boaters in the UK won’t be familiar with? One word: aluminium.

All of the brands listed above build in GRP (except XO who mate an ally hull to a glass-fibre deck) so if you’re in the market for something tough and resilient that won’t even raise an eyebrow at at the odd knock or scrape, then the Viggo C8 should be of interest.

Boats like this are ten a penny in the archipelagos of Scandinavia. As common as a Ford Mondeo on British roads, the Scandis use them to commute between islands all year around and in all states of weather.

They are part of the furniture in domestic markets but in the salubrious surroundings of Swanwick Marina with rows and rows of gleaming glass fibre cruisers on show the Viggo C8 cuts a dash, its shiny metal hull glinting in the bright winter sun.

This sleek Swedish rocketship gives Nick Burnham the ride of his life. Join us for a thrilling drive in the

Its stance is menacing with an imposing furrowed wheelhouse and knifelike hull, which tapers to a pin-sharp 24° deadrise at the transom.

Creature comforts on deck are hard to find; there are some cushions that sit atop the storage bins in the forward cockpit and a small metal table that can be installed inside the wheelhouse or on the foredeck, but in essence it’s all pretty sparse with a focus on toughness, reliability and ease of maintenance.

That is the entire point of a boat like this, of course, it’s about shutting the doors, cranking up the heating and the throttle, and getting to your destination whatever the weather at any time of the year, not lazing about in the sun or spending hours on anchor.