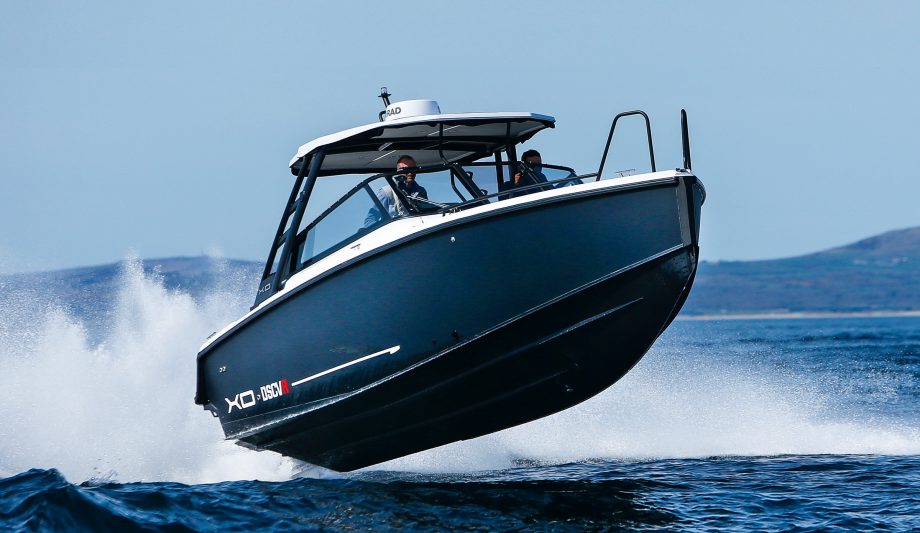 After a few years out of the spotlight, XO is back with the XO 260 DSCVR, a bullet-proof new sportsboat that combines user-friendly features with laser-sharp handling.

For a brief period from 2012 to 2015 Finnish brand XO was the brightest star in the Scandinavian sportsboat firmament. Its vinyl-wrapped deep-vee aluminium hulls matched to powerful engines and bullet-proof build made for some of the toughest, fastest and sweetest-handling craft around.

In the May 2015 issue of Motor Boat & Yachting the diminutive XO 250 ran rings around the combined might of an Axopar 28, Draco 27 and Paragon Ranger 25, even though we gave the final nod to the Axopar due to its superior cockpit layout and value for money.

It was a telling moment as in the years that followed Axopar sales rocketed while XO sales stalled, partly due to a change of ownership at the yard and of its UK distributor.

Now it is back with a vengeance, boasting a reinvigorated model line-up, more user-friendly cockpit layouts and a new UK dealer in Ideal Boat. The 260 DSCVR is a perfect example of XO’s new, innovative approach.

Measuring just over 26ft but with a considerably wider beam and higher freeboard than the waif-like 250, the XO 260 DSCVR feels like a significantly more substantial craft than its predecessor.

Any concerns that the new models might lack some of the previous version’s structural integrity are swept away the minute you step on board. The company motto “When others stay in port” rings true – everything about the XO 260 looks and feels like it’s been built to withstand a meteor shower.

The XO260 is still as hard as nails but the edges have been softened. Photo: XO Boats

Some of that is a natural consequence of building the hull in what the yard describes as “military grade aluminium” with a seriously robust supporting framework to ensure it is both more rigid and yet lighter than a standard GRP hull, but it’s also down to the standard of fixtures and fittings.

Let’s not forget that the cockpit moulding is actually GRP in order to facilitate the soft curves, smooth finish and luxurious feel of what is, after all, quite a costly bit of kit.

The good news is that the standard of these mouldings as well as the latches, hinges and struts that open and close them feel every bit as robust as the hull they are secured to. The same applies to the soft furnishings such as the cockpit upholstery as well as the more technical equipment like the adjustable suspension helm seats and clever fold-out anchor mechanism.

Converting the dinette to a sunbed is like doing a jigsaw but the end result is worth the effort. Photo: Paul Wyeth

I suspect it’s no coincidence that the naming policy of the new range (250 DFNDR, 260 DSCVR etc) seems to mirror the Land Rover range of cars given that they both seem to channel the same vibe of tough adventurous underpinnings matched to a surprisingly luxurious interior.

The cockpit layout also displays the kind of smart yet practical thinking that Scandinavian boats are renowned for. There are lockers, cleats and handrails exactly where you expect them to be, and the way the aft cockpit seating converts from a sociable U-shaped dining area into a large, flat sunpad will appeal to the LEGO enthusiast in all of us as much as to the sun worshippers.

It’s not the quickest of procedures – a permanent fixed sunbed would be a lot easier – but given the limitations of space it is an effective one. At least there’s another surprisingly deep and roomy seating area in the bow with its own teak table and cup holders for when the sunbed is in use. Rather more surprising is the heads compartment cleverly concealed in the void beneath the navigator’s side of the dashboard.

The driver’s seat has suspension as standard but for the navigator it’s an option. Photo: Paul Wyeth

You could spend an entire day on board and not know that it’s there but swing open the side panel and it reveals a small but pleasantly bright heads space complete with optional sink, pull out shower and electric toilet.

All good noteworthy stuff but not the reason you’re going to shell out £100,000 or more for a 26ft sportsboat. That only becomes evident when you settle down into the beautifully sculpted suspension bucket seat, wrap your fingers round the perfectly proportioned leather steering wheel and ease the throttle forward.

Our test boat came with the upgraded 400hp supercharged Mercury outboard engine, which seems to put out so much torque so quickly that it takes a moment for the prop to find its grip on the water before rocketing us forward with real urgency. We topped out at 43.1 knots in near perfect conditions off Pwllheli beach – quick but still not the main reason to buy this boat.

Everything about the XO looks and feels like it’s been built to withstand a meteor shower. Photo: XO Boats

That finally becomes clear when you point its distinctive snub-nosed bow at the nearest wake, bury the throttle and hold on tight. If you’re expecting high drama, prepare to be disappointed because it’s precisely the lack of drama that makes it so impressive. Once or twice we manage to get airborne but the majority of the time it just slices right through it with a metaphorical shrug of its shoulders as if to ask what all the fuss was about.

It’s not immune to slamming – the sharp deadrise angle of the hull does a very good job of softening the landings but can’t entirely disguise the extra beam and relatively short LOA, however the hull feels so solid that it never feels like you need to ease off. The natural instinct is simply to plant the throttle and let the combined effect of the robust aluminium hull and suspension seats soak up any residual pounding.

The feeling of indestructability is addictive and very reassuring for those few occasions when you might get caught out in unexpectedly big seas.

The forward cockpit also has lockers under the seats. Photo: Paul Wyeth

Being completely honest, the XO 260 doesn’t feel quite as sharp or responsive as the waif-like 250 (it weighs 500kg more) and it doesn’t change direction with the same alacrity, but it’s still a wonderfully enjoyable driving experience. Conversely it does feel much bigger, especially for passengers at the aft end of the cockpit where the higher freeboard and taller cockpit coamings make it feel like you are sitting in the boat rather than on it.

The sturdy T-top overhead only adds to the sense of security, providing shade and a useful place to hang on to when moving forward through the cockpit. It’s also a much more sociable boat, with opposing fold down seats on both sides of the cockpit and an optional wet bar with a sink, fridge and portable gas hob.

In summary, it feels like XO 260 has grown up in the intervening years. The youthful exuberance of the 250 has been toned down a little in favour of a boat that is larger, more comfortable and better suited to life at anchor rather than life on the edge. It’s still as hard as nails but the edges have been softened, the luxury quotient raised and the target market broadened to appeal to a much wider audience of current and future RIB and sportsboat owners.

It’s still not quite as spacious or leisure oriented as an Axopar 28 or Saxdor 320 but it’s much closer than it ever used to be without sacrificing any of the previous model’s aura of indestructability. Just as Land Rover has managed to reimagine the Defender as a comfortable road car without sacrificing its off-road credentials, so XO has succeeded in reinventing its latest model range as a seriously tough but much more useable sportsboat. Welcome back to the party, XO!

N.B. XO 260 DSCVR is pronounced Discover, not Discovery as the video states.