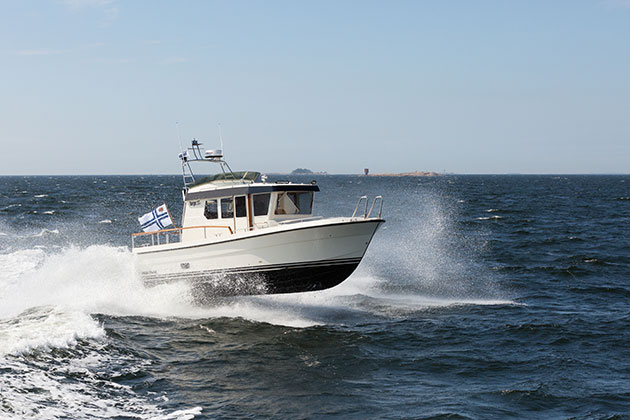 In the evolution not revolution world of Targas, the all-new Botnia Targa 27.2 marks a sweet spot in the range

When it comes to design language, Botnia Targas tend to modernise at roughly the same pace as the Royal Family.

So imagine my surprise when I turned up to Salterns Marina in Poole and found that the Targa I had come to test was not only white – instead of the usual cream – but had black guardrails, grab handles and cleats in place of stainless steel.

This is the Blackline package, a £4,788 option that sees the metalwork powder coated in black paint and, though it’s not exactly a radical departure from the Targa norm, it adds a contemporary twist and a point of difference over the standard cream and navy colour scheme.

The 27.2’s roots can be traced all the way back to the Targa 27, which was launched back in 1991. In 2003 it was upgraded to the 27.1 and there was a final revamp in 2014 that saw an improved cabin design and the option to have internal access to the toilet, which previously could only be entered from the foredeck.

If it's plush cabins and sunpads you're after, look away now. But if you want a rock-solid wave smasher that

Nick Burnham guides you around the Botnia Targa 27/27.1

The 27.2’s layout is mostly identical with the heads forward and a double cabin tucked aft, though the hull is totally new and carries slightly more beam and, despite the name, it’s just over 30ft long.

There are three engines on offer; all variations of the Volvo Penta D6 block in 330hp, 370hp and 400hp outputs. The boat we have on test has the largest motor and it sits in a pristine engine bay that is accessed via a huge hatch in the cockpit. Targas are built by the Finns to be used as workhorses and commuting tools all year round so dependability and ease of maintenance is key.

In a range where all models, no matter the size, serve their function so well the 27.2 appears to be in a sweet spot. It’s big enough for a couple to spend extended time on board without  feeling cramped but it’s not in the realm of crazy money given its remarkable capabilities.

Update: The Botnia Targa 27.2 is scheduled to go on display at the 2021 Southampton Boat Show.