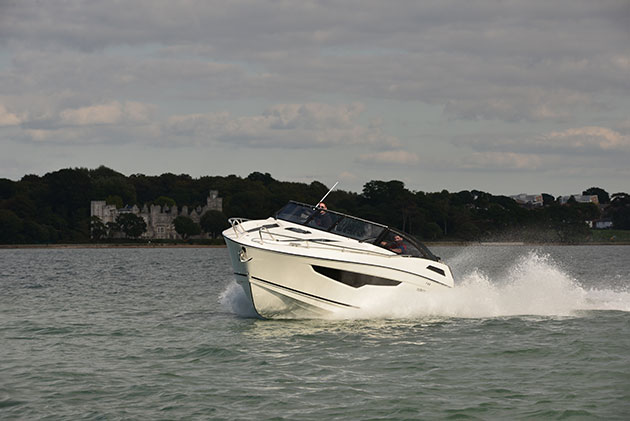 The continual rise in popularity of outboard motors is paying dividends for both builders and consumers. With pretty much all the complex oily bits packaged up in a single unit that can be easily bolted to the transom, boat manufacturers are free to concentrate on everything ahead of the power unit.

Eight metres seems to be proving the sweet spot for single outboard-powered weekenders, with boats like the Finnmaster T8, Beneteau Flyer 8 and Jeanneau Cap Camarat 7.5DC vying for your hard earned. Into this hotly contested market comes Polish builder Parker, with the biggest of its open boat line, the 850 Voyager.

The most obvious benefit that Parker brings to this segment is sheer volume. At 2.8-metres wide it’s one of the beamiest boats in this category, which it combines with high cockpit sides that run right to the edges for the maximum amount of space (access to the foredeck is up steps and through the centre of the windscreen).

The result is plenty of seating, but the key is the terrific adaptability created by two simple moving backrests. The rearmost one hinges forward, creating aft-facing seating right at the rear of the boat, fantastic for relaxing at anchor and watching the world go by.

Hinge it back and the seat reverts to facing inward around an expensive looking folding teak table on an easily removed pedestal. It’s one side ofa C-shaped dinette area, and the forward backrest performs the same trick, cantilevering between a rearward-facing part of the dinette or creating a large L-shaped seating area alongside the helm, putting three or four crew up at the front, amidst the action, and protected by the high GRP-framed windscreen.

It’s such a simple design yet it works so well, optimising the seating plan for lounging, dining or cruising. There’s a wet bar on the starboard side of the cockpit behind the helm, with a sink and hob.

That volume works well on the lower deck too. Although the boat is clearly a cockpit-biased weekender, this is far more than just a basic cuddy downstairs. In line with modern trends, there’s no dedicated seating down here, just a large double bed (with a comfy four-inch thick mattress), but what is unusual is a second good-sized double berth running transversely beneath the cockpit, something you often find on sportscruisers, but rarely on weekenders.

Read the full test in the April 2019 edition of MBY…