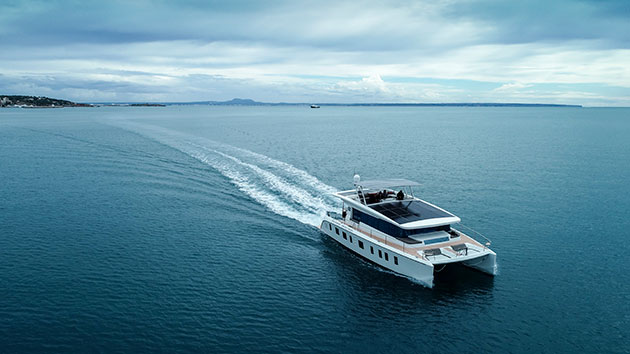 The Silent Yachts 55, with its battery bank and solar panels, is a glimpse into the future of motorboats, but is it a viable option for serious cruising?

As we gaze towards the horizon in search of what the future holds for the motor boat, solar energy and harnessing the power of electricity for propulsion loom large in our view.

Some boat yards are already ahead of the curve – Greenline has been banging this particular drum for a decade, while others like Sunseeker have only recently jumped on the bandwagon by unveiling a partnership with MTU that will result in its first diesel/electric production craft in 2021.

However, neither of these yards come close to the ambition of Silent Yachts and its solar powered range of all-electric motor catamarans.

This Austrian outfit claims to have solved the concerns many boaters have about the limited range of electric boats by creating a vessel with unlimited range and little dependence on fossil fuel that is a genuine, useable alternative to a conventional motor boat with an internal combustion engine.

Nor is this simply wishful thinking based on a virtual concept – several examples of the Silent 55 have already been built and we’re here to sea trial one to see if the boat of the future has in fact already arrived.

What do we actually have here, then? One of the major attractions of the 55 is that its design isn’t particularly wacky or off the wall. To the naked eye it is a 55ft power catamaran with a pair of shafts, two helm stations and all the voluminous accommodation one would expect of a big cruising multihull.

The wheelhouse and collapsible flybridge hardtop are home to 30 solar panels with a combined output of 10kW that can either feed the two electric motors directly or keep the 140kWh battery bank topped up.

There is still one combustion engine on board but it’s a 100kW Volvo Penta generator employed as range extender and charging aid if required. This burns a mere 33lph and is connected to a pair of 800-litre fuel tanks giving around 48 hours of running time.

Read the full report in the April 2019 edition of MBY…

Solarwave has fully embraced electric technology and is bringing it to fruition in a 62-footer, writes Dave Marsh