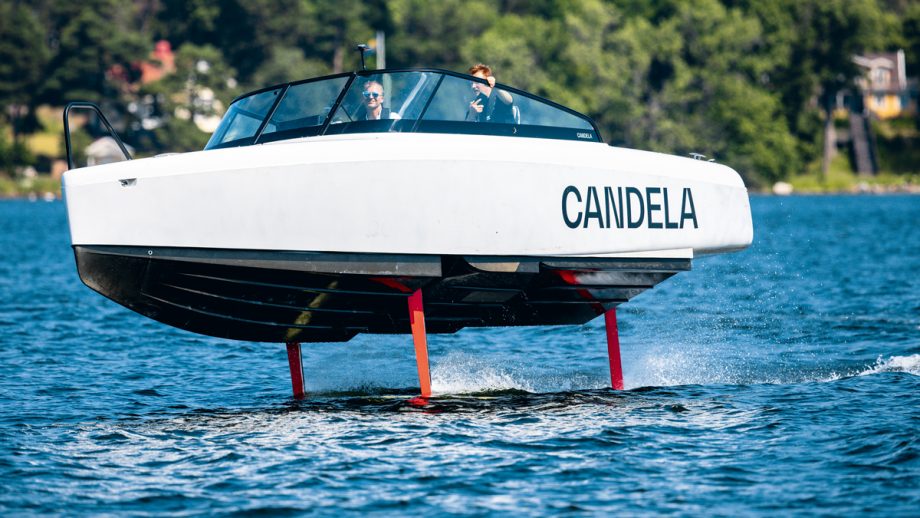 Is Candela’s ‘flying’ C-8 the craft that will finally take electric boats into the mainstream? MBY is the first boat magazine in the world to test this revolutionary foiling machine...

Once in a while we are lucky enough to helm a boat that completely redefines what is possible. In my 17 years as editor that has only happened to me twice.

The first was in 2015 when Safehaven Marine took me through the tail end of a hurricane in its seemingly indestructible Barracuda SV11, the second was last September when I got the chance to drive the world’s first foiling electric boat, the Candela C-7.

I could not get over how quiet, comfortable and exhilarating it was to ‘fly’ above the waves in this astonishingly efficient all-electric sportsboat.

Despite the C-7’s transformational driving experience, I couldn’t help feeling it was the precursor to the main event – a brilliantly clever proof of concept rather than the fully finished article.

The foiling Candela C-8 will be the first boat to use the C-POD. Bigger craft will follow later

Its diminutive proportions, low freeboard, open bow, hand built construction and high price automatically relegated it to the realms of a cool but pricey toy for superyacht owners rather than a mainstream alternative to a petrol boat.

It didn’t take long for that to be confirmed. Within weeks Candela announced it was working on a larger, more seaworthy, closed-bow 28ft weekender that could be mass produced in a factory and sold at a competitive price to premium petrol craft from the likes of Chris-Craft and Boston Whaler.

With a claimed range of 50nm at 22 knots, overnight accommodation for two and a more robust deep vee foiling hull, this new Candela C-8 could be the game-changer we were waiting for.

Read Hugo’s full review of the Candela C-8 in the September 2022 issue of MBY, which is out now.

The result of 16 months of intensive development, the maiden flight of the Candela C-8 back in May 2022 did not disappoint. Once the prescribed take-off speed of 16 knots was reached, the stepped hull broke free from the icy waters off Lindingö, where the Swedish builder is based.

It then flew across the sea at its anticipated cruising speed of 20 knots with minimal noise or wake and zero emissions. At that speed early test results confirm that it will be able to deliver the claimed 50nm range from the standard 44kWh lithium-ion battery bank. Top speed for short bursts is 30 knots.

The numbers are impressive given that the C-8 is a considerably bigger, more practical boat than the original lightweight Candela C-7. They also provide a ringing endorsement of the new torpedo-shaped retractable C-Pod drive system with contra-rotating props that was specifically developed for this boat.

The key to the C-8’s range and performance is the computer controlled foiling system that drastically reduces drag and flies above the waves delivering an eerily smooth ride.

A typical planing hull runs with a 4:1 lift-to-drag ratio, whereas Candela claims its actively stabilised C-8 has a 20:1 lift advantage, more than any other e-foiler yet built. Unlike the open C-7, the Candela C-8 features a small cuddy cabin in the bow and has been designed to be mass-produced in fibreglass like a conventional sportsboat.

The company plans to build 400 of them a year by 2024, and if pre-launch sales are anything to go by, it will need to. Candela C-8 deliveries, with or without the optional hardtop, are due to start this summer.

How the Candela C-8 works

The Candela C-8 uses a development of the active foiling technology pioneered on the C-7 but fitted to a longer, wider hull that has been engineered for mass market production.

This means that even though the Candela C-8 is a substantially bigger, better equipped, more comfortable weekender, it’s only marginally more expensive than the custom-built Candela C-7 and on a par with premium petrol-powered weekenders of the same size. Prices will start at €290,000 ex. tax.

Candela reckons the C-8 will be an ‘iPhone moment’ for the industry, when all-electric boats switch from being a niche alternative to a mainstream buying choice.

Early sales figures seem to back that up with 65 orders taken since details of the C-8 were released in September 2021. According to Candela, this makes it one of the best selling premium 28ft sportsboats in Europe, regardless of power source.

Although at first glance the Candela C-8 may look like a regular runabout, you can’t miss the bright red strut sticking up through a hole in the aft sunpad.

This is linked to Candela’s all-new C-POD electric drive system, which can be raised to reduce its draught in shallow water but lowered to keep the propeller in the water whilst foiling. It also has an integrated T-shaped foil to create lift at the stern and adjust the trim when foiling.

The larger forward foil is also connected to a pair of lifting struts but these are hidden behind the helm console when raised. The foil itself docks inside the deeper of the hull’s two steps.

At displacement speed the Candela C-8 behaves like a conventional sportsboat but once it reaches 16 knots, the hull lifts clear of the water and starts to ‘fly’ on its two foils.

As well as reducing energy consumption by a reported 80%, it also makes for a much quieter, more comfortable ride because the hull stays above the waves while the foils stay below them.

Candela says the C-8 should be able to foil in wave heights up to 1.4m (4ft 7in) but will need to drop back off its foils to cope with rougher conditions.

Hardtop and open versions are available

A comparable planing boat requires around five to seven times more power to stay on the plane. A sophisticated system of sensors keeps the Candela C-8 flying level by adjusting the foils hundreds of times a second.

The result is said to be an ultra-stable ‘magic carpet’ ride in a straight line and sportscar-precise handling in the turns. Lightly loaded with four people, the C-8 will deliver a claimed range of 50nm at 22 knots and around 30nm at its top speed of 30 knots.

As well as being 3ft longer and four inches wider than the C-7, the Candela C-8 has a higher freeboard with a closed bow making it a drier, more seaworthy boat. It also creates space for a forward cabin with a V-shaped berth.

The cockpit features a pair of helm seats and a navigator’s seat that swivel to face the aft bench and dining table. A hardtop version will also be available.

Although relatively expensive to buy, Candela claims the C-8 will be vastly cheaper to run than an equivalent petrol powered boat.

The cost of recharging the 45kWh battery is said to be 95% cheaper than the petrol needed to cover the same distance, while the C-POD motor requires no oil changes nor servicing for 3,000 hours (more than most leisure boats do in a lifetime).

Candela has high hopes for the C-8 with an all-new factory already under construction capable of building 400 boats a year.