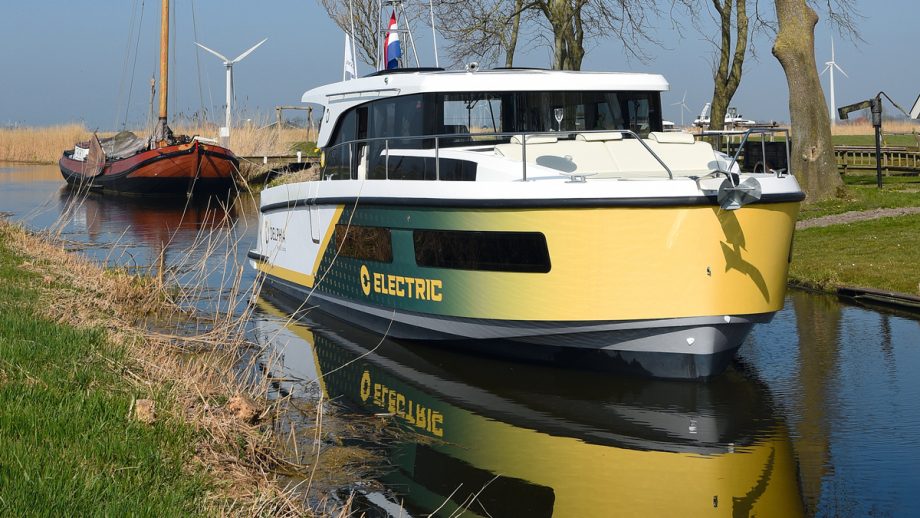 With Delphia committed to building only electric boats by 2024 its Delphia 11 Sedan is its first step towards a greener future. Jack Haines heads to the Netherlands for a back-to-back test with its diesel counterpart...

Candela, Vita and X Shore are all building cutting-edge electric boats for the top end of the market but the Delphia 11 is a commitment from the biggest boat builder in the world to mass produce electric boats.

The Polish brand, which was bought by Beneteau Group in 2018 will be electric only by 2024. Not only that but alongside their partner, Torqeedo, Delphia and Beneteau Group have committed to investing in the electric boats charging infrastructure in certain markets to boost confidence in its electric-only product.

The 11 is Delphia’s first foray into all-electric boating and to put it through its paces in a realistic environment, we were invited to the Netherlands to test the electric Delphia 11 Sedan alongside its diesel sibling and a diesel-powered flybridge version of the Delphia 11, dubbed the Flylounge.

Delphias of old were renowned for their bang-for-buck approach, with oodles of living space for a reasonable asking price and, although they were equipped to go offshore, most found homes on the rivers and lakes of mainland Europe.

The modern Delphia product is entirely focussed on inland boating and was designed by Tony Castro from the keel up with electric propulsion in mind. The hull is a full displacement hard chine design with an upright stem and full bow sections in a bid to balance generous interior volume with stable, efficient, slow- speed cruising.

Even with the 150hp diesel version of the Delphia 11 you’re topping out at 8.5 knots so life in the slow lane really is the name of the game. From Delphia’s base in Makkum we would do a loop of the local waterways with a stint on the IJsselmeer, swapping between the three boats for an ideal back-to-back taste of the differences between cruising aboard identical diesel and electric boats.