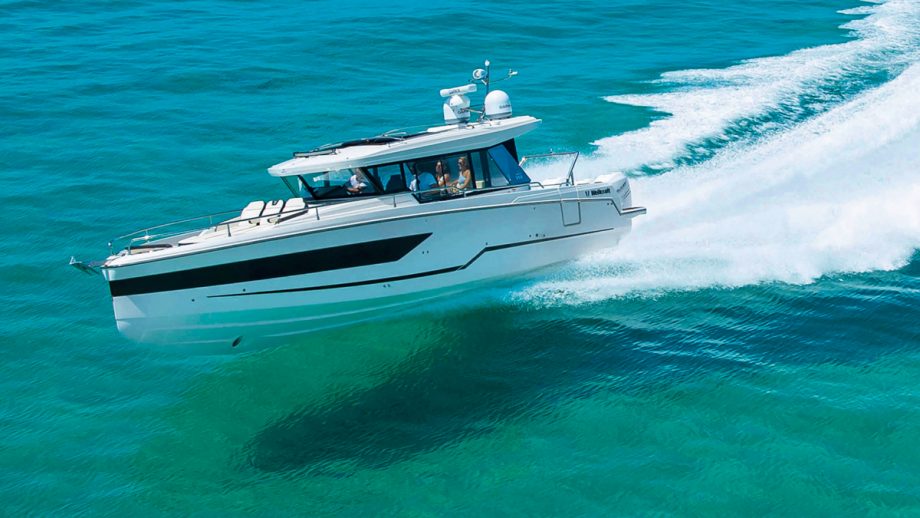 Looking for something bigger, beefier and more powerful than the current crop of Nordic-style weekenders? The new Wellcraft 355 is keen to say hello…

Until recently, each of Wellcraft’s six models was a clear re-voicing of the brand’s time-honoured approach to saltwater fishing. Centre consoles? Check. Deep side decks? Check. Flared bows and high-performance outboards? All was exactly as the keen fisherman would expect.

But in spite of its fame as a builder of fast offshore fishing boats, Wellcraft is no stranger to broader, less specialised forms of boat design. On the contrary, in the past, it has produced a range of Sportsman bow riders, as well as a line of cabin-equipped Coastal sports fishers that did a very decent job for family cruisers.

And now, in the form of the mighty new Wellcraft 355, they have gone a step further by committing to a flagship that puts multipurpose utility at the very heart of the design.

First thing’s first. With that plumb bow, inverted pilothouse screen and long, linear wraparound hull window, this is a seriously good looking boat. It carries a heavyweight masculine presence that is easily a match for a boat like the Axopar 37 Cross Cabin or Saxdor 400 GTC.

But it seems incongruous to describe the Wellcraft 355 as direct competition for that modern breed of Nordic-style pilothouse weekender because when you get on board, it simply doesn’t feel like a boat of quite the same order.

For instance, while it shares a broadly similar length and beam to the Axopar 37, the Wellcraft 355 brings with it far greater elevation, as well as 1.5 tonnes of extra weight and an extra 350hp of transom capacity.

It also comes with a non-stepped hull that carries the beam much further forward, plus a big pilothouse that ramps up the volume courtesy of an offset deck layout.

While the Axopar feels finely tapered and waspish, the Wellcraft 355 feels robust and beamy – and not just in the bow, where it provides a trio of sun loungers and convertible seating for up to eight but also in the cockpit and at the helm, where it feels distinctly mature and workmanlike.

Imagine a bulked-out Axopar with a spoonful of Botnia Targa’s offshore intent and a sprinkling of Beneteau’s multi-purpose know-how and you’d get pretty close to how the Wellcraft 355 feels.

Read Alex’s full review of the Wellcraft 355 in the February 2023 issue of MBY, which is out now.