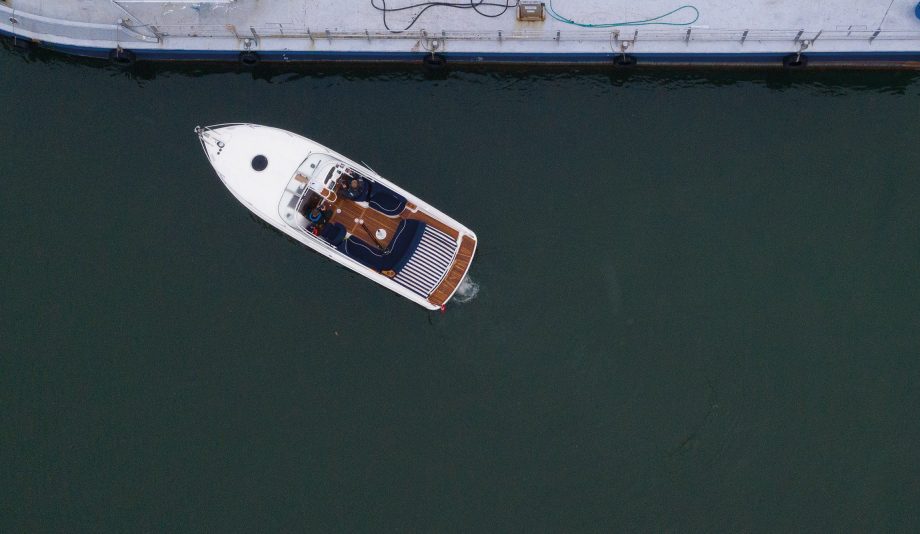 Ferry gliding is the art of using the flow of water or wind past your boat to move it sideways across that flow. Our resident boating instructor Jon Mendez explains how it's done...

Traditionally used by ferries to cross fast-flowing rivers, ferry gliding is also extremely useful for leisure craft when arriving at or leaving a tide or wind-affected berth.

It works by using your boat’s steering and power in combination with the wind and water to create a sideways force. It’s best to do this with the bow into the elements, as the shape of the bow makes it easier to see and feel the effect.

Before you attempt it, look carefully for any obstructions upstream such as moored vessels, bridge stanchions or posts that may deflect the flow and make things less predictable.

When filming this video we had a nice downstream flow on the river and very little wind, so I positioned the bow upstream and slowed to a stop, judging when we were stationary by using a transit on the barge – our target.

To prevent us being swept downstream, I applied a click of ahead every few seconds to counter the current. I then turned the helm towards the target and engaged ahead momentarily to point the bow to starboard, so that the flow of water started pushing on our port side.

The aim is to prevent the boat from moving forwards or backwards, while allowing the water to move the boat sideways. You should carefully monitor the angle of the boat towards the target – the steeper the angle the quicker the boat will move sideways.

If you find yourself moving sideways too fast, reduce the angle by bringing the helm away from the target, in this case by turning to port and using a click of ahead.

If you want to come alongside your target, wait until you are within a metre of it before bringing the bow parallel to it as the target may well be generating its own turbulence that tries to push you off again.

This will allow you to come alongside nice and gently. As you touch, put the upstream line on first to act as a brake. To leave, angle the bow away from the target – the water flow over the rudder or outdrive alone may be enough to start the sideways motion.

If not, use one click ahead to get the motion started. Remember that the stern quarter will be pushed in towards the pontoon and may need an extra fender.

Positioning yourself stern-to the elements works just as well but requires more practice as the blunter shape means the sideways motion can go from gentle to quite fast with only a small change of angle.

If you are using the wind rather than the water as your source of sideways motion, it’s the same manoeuvre but it will be your boat’s windage rather than its underwater profile that affects the speed of movement and again may need more practice.

What about wind and current? Simply adjust your initial start position so it’s balanced against both elements. Remember that the wind may be influenced by the object you are coming alongside too so be prepared for last-minute changes in direction.

The key with ferry gliding is that the slower you make your boat go sideways, the more control you have and the gentler you will come alongside. It’s a great skill to master that looks effortless, uses very little power and really shows a skipper’s appreciation of the elements.

1. Balancing the boat. Point the bow into the current/flow and position the boat parallel to the target (in this case the barge). Check it’s not moving fore or aft by lining up a transit on the barge using occasional clicks of ahead to keep it stationary.

2. Starting the ferry glide. With the boat now facing upstream, turn the wheel towards the target and engage one short click of ahead to get the whole boat angled towards it so that the water starts to push on the upstream side (in this case, the port side).

3. Approaching the target. As the boat starts moving sideways you may need the odd extra click of ahead to prevent it being swept backwards. Turn the wheel to port to slow your speed of approach.

4. Leaving the target. Turn the wheel away and engage ahead for one click to point the bow out into the stream and let the flow of water work its magic. Watch your stern as this will also push it closer to the barge.

5. Control your speed. Now that more water is flowing onto the starboard side of the boat than the port, the boat will start to move sideways. Increase the angle to go faster or reduce to slow down.

6. Stern first. You can carry out the same manoeuvre with the stern pointing into the elements using clicks of astern to stop you moving forward. Remember that the blunter stern will be less precise.