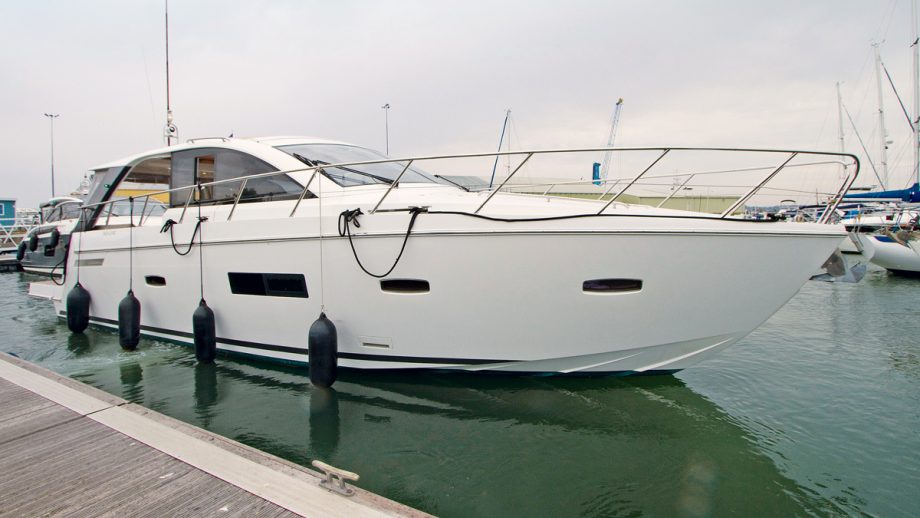 The waters of economic fortune have given Sealine a choppy ride over the years. The company’s original parent, Fibrasonic Marine, began boat production in 1972, just a year ahead of the world oil crisis.

The company survived that particular storm by finding other work and in 1978, it bounced back with two new models called C-Line. A year later, C-Line became Sealine – and in 1998, Fibrasonic founder, Tom Murrant, sold Sealine to a group of venture capitalists.

That led on, three years later, to the Brunswick Corporation (current-day owner of Sea Ray, Bayliner, Boston Whaler and Quicksilver, among many other brands) buying the operation for $68m.

All was then relatively calm until the global financial crisis of 2008 bit, and in 2011 Brunswick offloaded Sealine to a private equity firm, which placed the company in administration just two years later.

So does the Sealine SC42 deliver?

With the Sealine plant in Kidderminster closed, Aurelius SE, the Munich-based parent of Hanse Yachts, stepped in and acquired Sealine’s assets.

Consequently, production of models originally supposed to be built at Kidderminster soon ceased. Among the vessels affected was the subject of this used boat report – a 2014 Sealine S450, offered for sale by Bates Wharf in Poole for £349,995.

Produced between 2008 and 2015, the Sealine S450 was the successor to the Sealine SC42. In reality, the two vessels are pretty much the same boat, except for the fact that the SC42’s optional extended swim platform became a standard feature on the S450.

Like every other element of the S450, this platform is big. Offered either in fixed format or as a hi-lo option, it considerably enhances the versatility of the boat in terms of its ability to carry tenders, personal watercraft and toys.

What’s more, access to the platform is not only good but entertaining too, as the seating unit immediately ahead of it splits down the middle and glides apart to provide a central walkway to the cockpit, courtesy of some cleverly concealed hydraulics in the portside seating section.

The backrests of the rear seats are also powered by hydraulics, folding down to create a king-size sunbathing area. All of this is very much in line with Sealine’s original design concept of developing a boat that maximised the scale of its social spaces.

Two owners who enthusiastically praise that approach are Phil O’Brien who owns a Sealine S450 and Mark Spicknell, who owns an SC42 with extended bathing platform. When we asked them what the best thing was about their boats, both replied without hesitation, “the space”.

“The boat offers so much,” said Phil. “To start with, the aft seating area is the full width of the boat. We’ve had eight people around the table and I reckon, with a couple of extra stools, it could accommodate ten.

“Then up front, there are four forward-facing seats, which means more people can get involved in the journey.”

“The bathing platform is massive too,” adds Mark. “Both Phil and I have Hurley H30 davit systems for our tenders, which means they do hang over the back a bit, but because the platform is so big you can still get out there and walk around, no problem.”

The Sealine SC42/S450 was offered with twin Volvo Penta D6 engines with power outputs of either 330 or 370hp. As noted at the end of this article, we did uncover a Sealine S450 with 435hp engines for sale in America, but this is believed to be a one-off, built for the importer.

While the 330s were a touch lightweight for a vessel of this nature, achieving around 26 knots at wide-open-throttle, the 370s lifted the speed to a far more respectable 32 knots.

A second choice for those that selected the more powerful engines was whether to go for sterndrives or the significantly more expensive Volvo Penta IPS system. Our two owners have one of each – Phil sterndrives and Mark IPS.

“My boat can be a handful when trying to dock in the wind,” says Phil. “You definitely need a plan, whereas Mark’s is a doddle! Apart from that, they’re pretty much identical in terms of performance.

“We do quite a bit of boating together, so we’ll get on the radio to compare speed over ground, rpm and so on, and there’s nothing between us. On average, we burn around 90-litres of fuel per hour.”

The two owners also agree on their boats’ seakeeping: “I’ve been out in a couple of big seas – though never by choice! – and the boat has been really well behaved,” says Phil.

“I’ve got a lot of confidence in it. It doesn’t generally roll a lot and if it’s really rough, I tend to get the bow pointed up a bit. It’s got quite a deep vee so that really helps break the waves.”

“I’ve been in seas fairly recently where there were three or four-metre waves,” adds Mark. “We were taking water clean over the boat and you couldn’t see out of the screen at times, but it coped with it brilliantly.”

While the two boats may be similar in terms of performance, there are significant differences on board: “Because my engines are further forward due to the pods, my aft cabin has a different layout to Phil’s,” explains Mark.

“Instead of three beds in line with the hull, I have two running across the boat. But while I lose a bit of room in the aft cabin, down in the engine room I can walk around the engines and gearboxes and get to the whole thing very easily, and I really like that.”

In terms of downsides, Phil and Mark’s list is short. Both pointed out that the large fabric sunroof will need replacing at some point. The large front windscreen is also prone to leaking, calling for regular dabs from the sealant gun.

The galley is superb, with plenty of workspace, a 1.5 bowl sink and a three-burner hob

One additional point worth bearing in mind, both said, is that the view forward is somewhat restricted by the large A-pillars, especially on the starboard side.

As we reported in our January 2012 review of the SC42, these big mullions are necessary to ensure the structural integrity of the roof. But one solution sometimes adopted by Phil is to steer from a more central position by using the left-hand side of the double helm seat.

There are two additional downsides to consider. Firstly, on the boat we viewed, the rear quarter covers could not be removed.

As you would expect, the lower six-person dinette can be rigged as a third double berth

It’s not a great look, but it’s one which Chris Manners of Sealine UK importer, TBS Boats, tells us can be easily rectified: “These types of covers were only used on German-built boats and there aren’t many of those around,” he says. “In the UK we had a different cover set. But it’s a simple job to snip the fixed German canvas and add a zip.”

Our second point concerns the helm seat, which even in its rear-most position leaves precious little room between its leading edge and the wheel.

While there is no problem driving the boat seated, anyone who prefers to stand at the helm would be well advised to give this point due consideration before committing.

Like everything else on the S450, the forward master cabin feels very, very big

Notwithstanding the above criticisms, the Sealine S450 has plenty to commend it. As Phil points out, the steps to the side decks start part-way through the cockpit, adjacent to two large units, which house the wet bar and the grill.

With no need to step onto the bathing platform to access the foredeck, the positioning of the steps inside the cockpit is an obvious plus point in terms of safety.

That emphasis continues as you walk forward, with heavy-duty guardrails, plus handrails along the length of the roof. Up front, the ‘big’ theme of this boat continues in the form of a triple sunpad with drinks holders and fold-up backrests.

Below decks, the Sealine S450 has plenty going for it too. The galley in particular is a joy, with ample worktop space, a one-and-a-half bowl sink and a three-burner hob. There’s no shortage of high and low storage space either.

At one end of the galley is a full-height unit housing a fridge and freezer, while on the forward bulkhead, a TV folds out to face the guests in a six-seater dinette, which can be converted into an extra double bed.

The forward ensuite is divided into separate heads and shower compartments

The boat has two ensuite cabins. The owner’s cabin sports a centrally aligned double bed with substantial wardrobes on either side of the entranceway. The ensuite compartment is split in two, with the heads to starboard and a large shower stall to port. These can also be accessed from the saloon.

Completing the picture is the aft cabin, which can vary depending on boat type. Our review boat has three beds, all on sliders, enabling you to choose between three singles, a double and single, or one enormous king size bed.

And that final option more or less sums up what the Sealine S450 is all about. In terms of space, this is a boat that just keeps on giving.

The Hanse-built Sealine S450 exhibits the brand’s excellent use of space. The huge sliding roof provides ‘wind-in-the-hair’ boating and the joystick provides confidence when mooring.

Original build quality is usually good and these boats should stand the test of time well, provided they have been properly maintained. Points to note when considering buying:

What’s on the market

First published in the November 2022 issue of MBY.