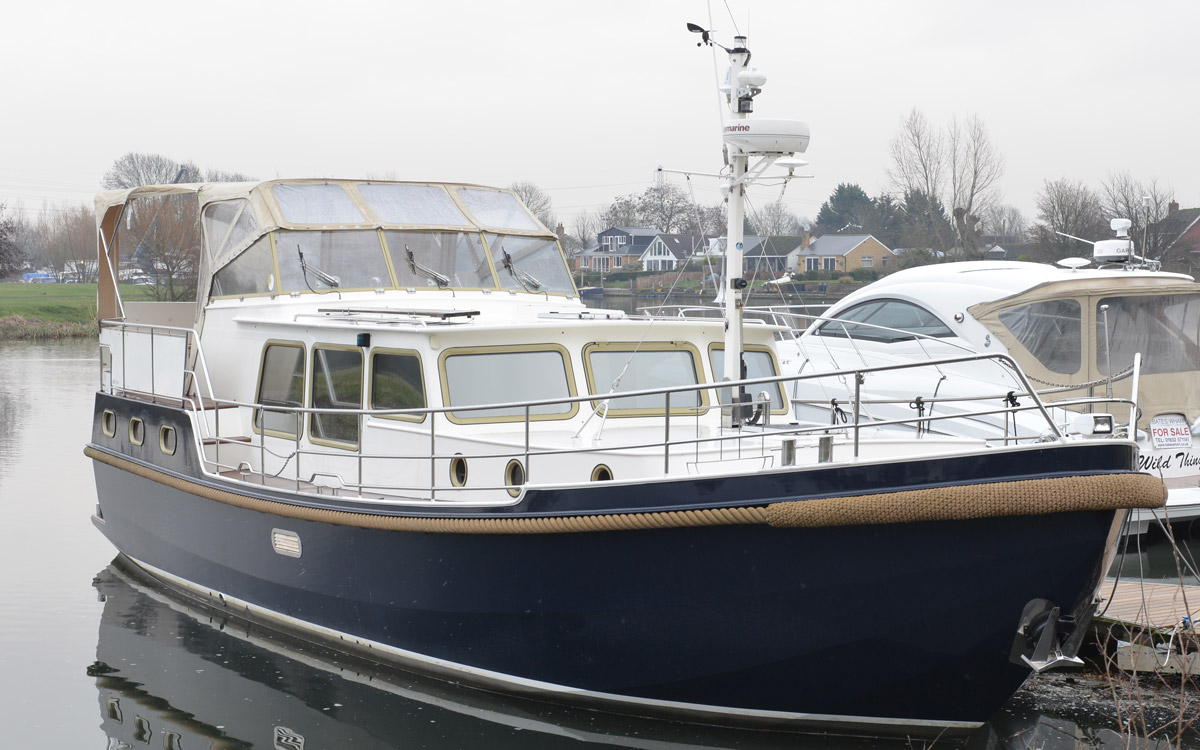 In our latest used boat report, we take a closer look at a fine Dutch import that epitomises flexibility, the Stevens 1375

Next time you’re at a boat show looking at a new boat and the smiling salesman assures you that you can choose whatever you want because ‘it’s a custom build’, try asking him for a little less draft, or for the boat to be nine inches shorter or for the roof to be two inches higher. You’ll see the smile freeze, unless it happens to be Karl Farrant of Thames-based Karl Farrant Marine Sales, and you’re discussing a new Stevens.

“When we were talking to Dutch builders about becoming a steel boat dealer, what impressed me most about Smelne Yachtcentre was the fact that they really will build exactly what you ask them for. Every aspect of the boat is up for discussion, within the bounds of what’s physically possible of course. The range brochure is little more than a suggestions guide.”

We’re sat inside a Stevens 1375 AC Vlet on a chilly January day on the River Thames. It’s a boat that epitomises the flexibility of the yard both during and post build, but before we get on to the interior we need to step outside into the drizzle and start by deciphering the name.

Firstly Stevens. Technically there is no such boat. Karl felt that the name Smelne didn’t read particularly well in English, so the boats he brings in are all christened Stevens, after the builder’s original name, De Steven. In essence they are exactly the same as the Smelne range, but Karl has created his own unique UK standard specification for the boats he imports.

“Initially we found that we fell between two stools. Companies like Pedro were occupying the lower cost steel boat segment and Linssen were the ‘go to’ high-end steel boats. Because the Smelne products are very high quality we couldn’t compete on price so we needed to up our game.

“I started speccing all UK boats with double glazing and a huge amount of insulation and noise reduction. There is 12mm cork lining behind the wood panelling, the floor is laminated ply sandwiching rubber insulation and there is expanding foam to all cable and pipe runs from the engineroom. The idea was to give a ‘Rolls-Royce’ feel of hush and quality.

“I upgraded the interior woodwork and I improved the detailing: gas struts on engine hatches, extra cleats, stainless steel trim to rope rub points and boarding points, that kind of thing. Finally, all boats I imported were BSS compliant. Add in the total customisation and these boats quickly became very popular.”

Next is 1375. The 13 refers to the fact that this is a 13-metre boat. The second half of the numerals refers to the transom arrangement. Versions include 1300, 1350, 1395 and so forth, but all are the same boat. Buyers can opt for a flat transom with no platform, a large extended platform with sweeping staircases either side (perfect for warmer climes such as the Med, where this area becomes a focal point) or anywhere in between. The boat we’re on occupies a mid point, it has a full-width bathing platform but a vertical ladder, hence 1375.

The innovative Jeanneau NC11 was built with practicality and usability in mind; Nick Burnham discovers how it stacks up as