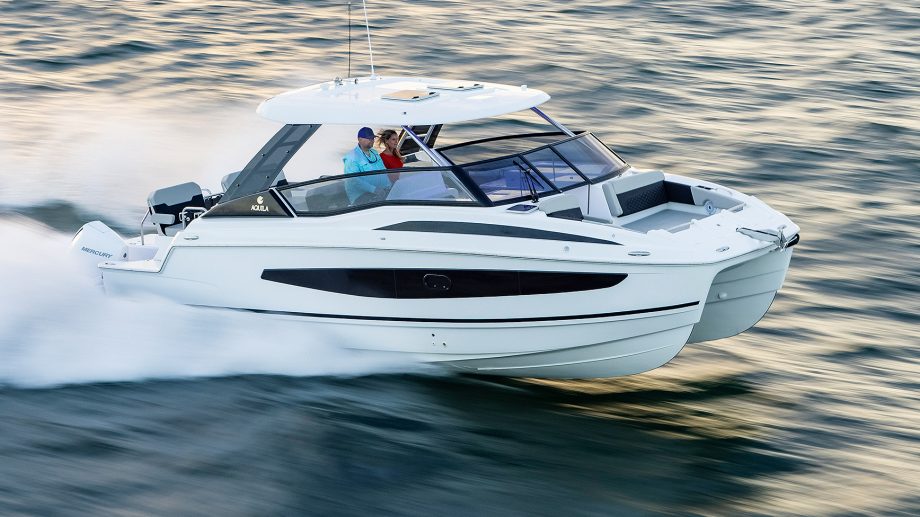 At this year's Cannes Yachting Festival, MBY editor Hugo Andreae took the chance to look inside the Aquila 32 Sport powercat, which was making its global debut.

How’s this for something different? Offering the speed and looks of a sportsboat but with the space and comfort of a deck boat, the new Aquila 32 Sport Catamaran claims to offer the best of both worlds.

Its secret is a pair of slender hulls that cut through the water better than a single one but with large enough planing surfaces to achieve 30 knots from two powerful Mercury Verado outboards.

Thanks to a relatively modest beam of 12ft 8in (only 1ft wider than a Bavaria Vida 33 of similar length) it manages to avoid the ungainly looks of some multi-hulls, while an optional joystick helps allay any slow speed handling concerns.

Compared to a monohull, however, it offers a huge amount of cockpit space, a big wet bar and excellent stability at rest.

There’s also room in the hulls for a fairly cosy double cabin to port and an impressively light, airy heads to starboard.

It’s built in China to an American design and the quality of everything from the mouldings to the fittings appears good. It’s being imported into the UK by Approved Boats and forms part of a range of larger cruising power catamarans.

The Aquila 32 is a left-field option but it offers a lot in a tidily put together package.