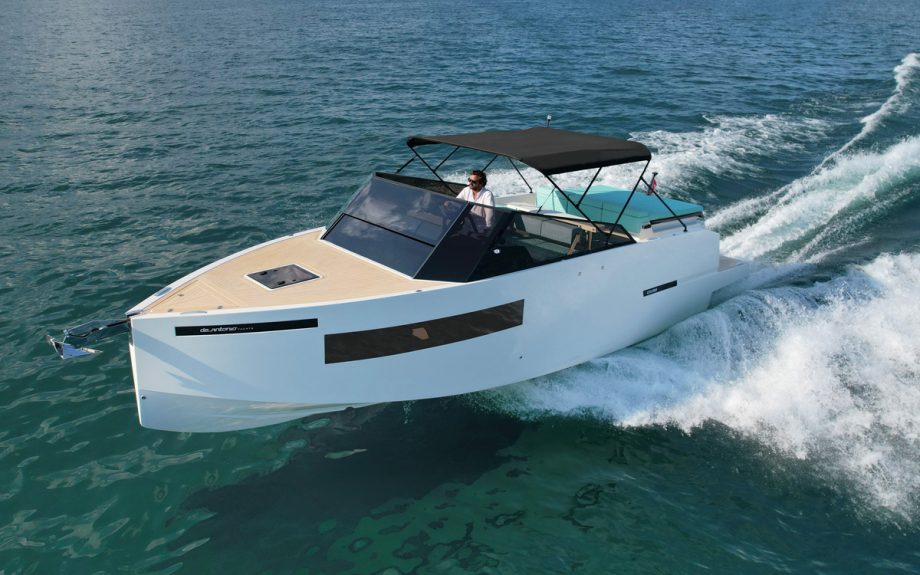 At the recent Southampton Boat Show, Motor Boat & Yachting deputy editor Jack Haines took the chance to tour both the Cruiser and Open versions of the DeAntonio D28.

There are four versions of the DeAntonio D28 and two of those were on display at the 2021 Southampton Boat Show: the Open and the Cruiser.

The Open is a full walkaround design with a heads compartment in the console and an optional T-top for shelter, while the Cruiser features a wraparound windscreen and a cuddy cabin with separate bathroom.

The Wally-like styling of both models is a little challenging but, designed in Spain and built in Poland, quality appears very good indeed with even the heads in the console of the open – usually a sparse, GRP-lined cave – fitted out in teak with a proper sea toilet and an attractive domestic quality sink and tap.

The Cruiser lacks the usable deck space of its sibling but below decks has a well proportioned double bed, a separate heads compartment and even a small galley with a gas hob, sink, fridge and some storage. You have to remind yourself that this is a boat of just over 26ft.

Not having an inboard engine to gobble up interior space is one reason the Cruiser is so well packaged and having outboards also means punchy performance, with the top spec twin 200hp version capable of 40 knots.

Boxing the outboards in creates space for a double sun pad and the versatile central dinette with a two-way bench at its forward end is identical on both versions.

In a crowded marketplace it’s refreshing to see such innovative thinking, as well as a high standard of fit and finish. Good on DeAntonio for doing something different and with a range that includes a 42, 46 and flagship D50 it looks like there could be plenty more to come.

Look out for our upcoming test in a future issue when we’ll see how well both boats perform on the water.