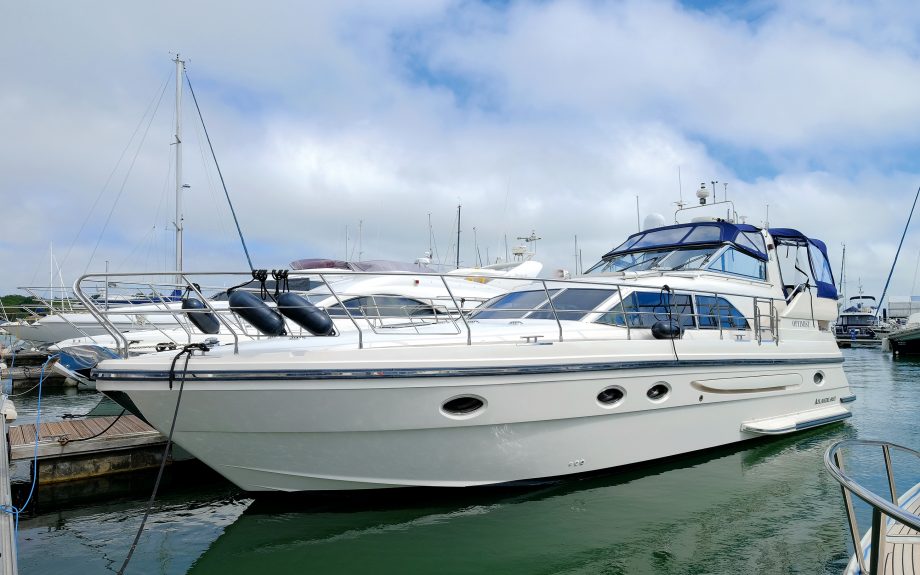 Our resident used boat expert Dave Marsh explains how to find a good Atlantic 444 or Atlantic 460 on the secondhand market.

Should you look closely at the picture below of the Atlantic 460 in the water, you’ll spot a year 2000+ era Fairline Phantom 43 in the background, all sleek swoopy windows and streamlined styling.

Nowadays that’s all changed, and designers are cramming as much glass into their bulky superstructures as they can, the aim being to bring the outside world into the heart of the saloon.

So it seems amusing that over three decades ago, the UK’s most prolific motorboat designer of the 20th century – John Bennett – was doing that very thing on his conservatively styled aft cabin cruisers for the likes of Atlantic and Broom.

Those long uninterrupted saloon windows are at the heart of the Atlantic 460 and 444’s appeal. Well, that and having a pair of ensuite cabins at opposite ends of this 46ft (14m) long boat.

That polar separation allowed the middle of the boat to be fashioned as a single expansive open-plan space, complete with comfy seating and a galley and a dinette, all basking in the abundant light flooding in through those big windows.

With no intrusive bulkheads and only four steps between the saloon and the galley, it’s a very sociable space, and a few more quick steps speeds you up to the raised helm and the cockpit.

Until you retire to bed, nobody is ever far from anybody else. I’ve been lucky enough to do a little cruising on this type of boat, and when they’re underway they feel and function more like a modern sportscruiser (where the saloon flows into the cockpit) than a flybridge boat.

However, their single raised helm position offers the truly open-air driving experience that only the flybridge boat can, but with the option of incrementally closing that area down with various canopies when the weather turns nasty.

When bedtime arrives, on a cruiser this size nothing can match the privacy offered by a boat with ensuite cabins whose front doors are 20 foot apart.

Of course, the Atlantic 460 and 444 cannot be all things to all men. A 46ft (14m) long flybridge boat would undoubtably provide far more deck space overall.

Read our full Atlantic 460 used boat report in the September 2021 issue of MBY, out August 5.