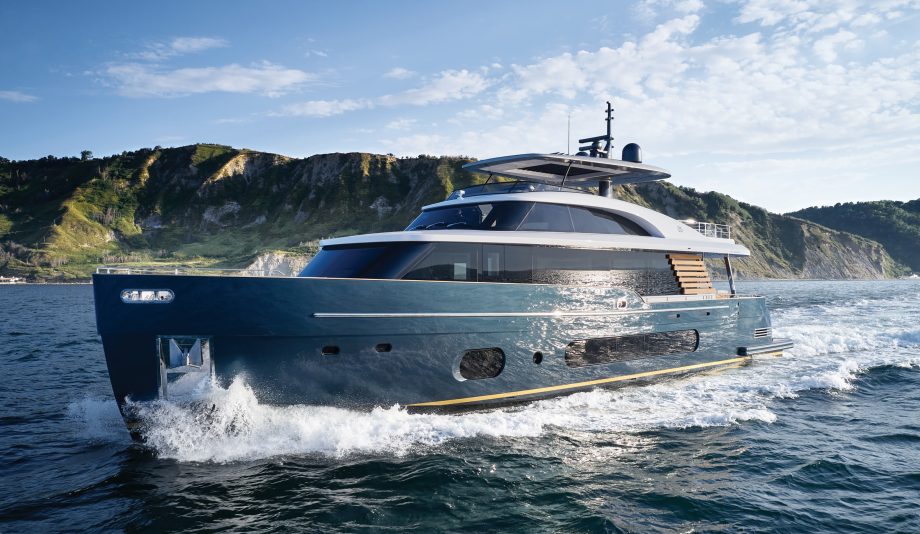 The flagship of the Azimut Magellano range is a festival of brave design inside and out but there’s more to the 25 Metri than meets the eye. Jack gets behind the wheel...

There is a piece of design aboard the Azimut Magellano 25 Metri so effective that it’s a wonder you don’t see it more often. The simple act of twisting the cockpit furniture 90° so that the table and seating lies along the deck rather than across it is a stroke of genius that means everybody sitting at the dinette has a view out over the water.

In the usual arrangement the people sitting on the bench that runs along the transom have to sit staring at the saloon doors rather than out to sea, which is surely the whole point of being out on the water in the first place? Another less simple design trick involves the transom lowering down to both expose the tender garage and create a fabulous extended bathing platform.

In the process of lowering down into the water the platform reveals a transparent panel at the top of the transom which creates an infinity-like perspective from the end of the aft deck. Combine this with the elegant furniture, which thanks to being mounted on recessed legs appears to float above the deck, and the effect really is rather special.

The question is, do you choose to park yourself here, under the shelter of the flybridge overhang, or on the foredeck with its Portuguese bridge and squishy sofas that turn into sunpads by dropping the pair of tables onto the deck and slinging some equally sumptuous cushions on top?

This is quite a spot; spacious, handsomely designed and complete with pop-up lights and speakers so the party can continue long after sundown. Let’s not forget the flybridge either, topped with one of those strange slatted hardtops that, to my eye, relinquish valuable open space in search of a slightly more pleasing look when closed. Everything below it is very good, though.

The low-slung chunky timber furniture, topped with more luxuriously upholstered cushions, wouldn’t look out of place in a Côte d’Azur beach club and it’s served by a central bar with a beautiful Verde Alpi marble top, which repeats throughout the decadent interior.

It’s wonderful, as long as you like the colour green. Under the protection of the hard top is a dinette arranged around a teak table inset with yet more brushed marble opposite a weatherproof TV that pops out of its housing at the touch of a button so you can watch a film alfresco.

Read our full review of the Azimut Magellano 25 Metri in the May issue of MBY, out April 1.