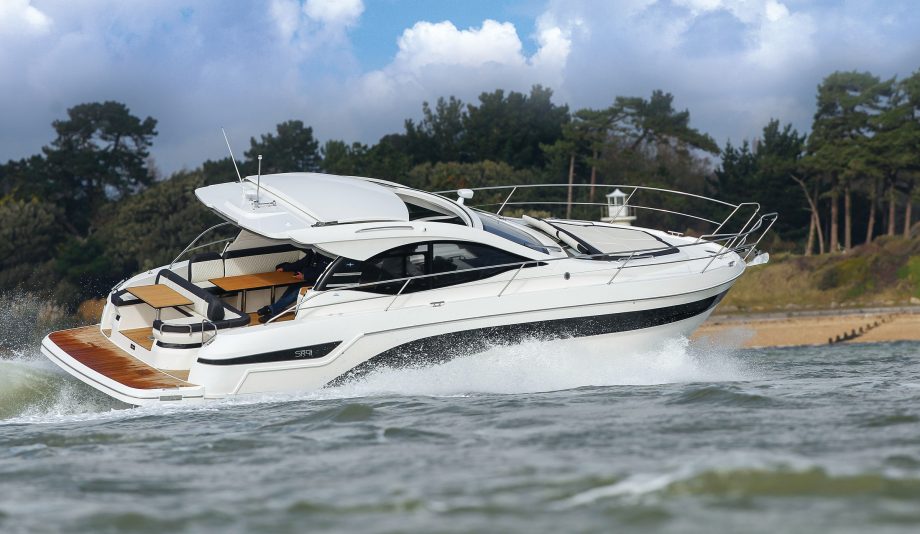 Bavaria’s latest model promises to blend the best of its sportscruiser range with its classy R-Line range. Does it succeed? Jack hits a wintry Solent in the Bavaria SR41 to find out...

When it comes to boats, value for money is all relative. A quarter of a million pounds is a significant amount of money by anyone’s standards but the truth is it doesn’t go as far as it used to in the marine world. So the fact that Bavaria offers this 43ft (13.1m) sportscruiser with twin engines from £250,472, including tax, deserves real credit. But there are some caveats.

That price is for a boat with no optional extras, many of which you would want, and it includes two 350hp Mercruiser petrol engines. Performance would no doubt be pleasing; fuel bills less so. Thankfully, there are a couple of diesel engines on the price list, both from Volvo Penta with either twin 300 or 380hp, the latter £21,000 extra over the former.

Even with the meatiest diesels, the starting price is just shy of £313,000 with tax, which means that with some careful ticking of the options boxes you could have the Bavaria SR41 with 760hp for around £350,000 before any discounts are applied.

We tested the Sealine C430 in the Solent in irritable Force 3 conditions. Credit: Richard Langdon

In a world where you can easily pay £1 million for an open day boat that seems pretty good bang for your buck to me. In specifying its stock Bavaria SR41, UK distributor Clipper Marine hadn’t been quite so economical with the options, adding over £100,000 of extras but it’s not out of the ordinary for a stock boat to be ordered with all the bells and whistles.

On previous Bavaria sportscruisers it was maybe a little too obvious where – shall we say – the value had been added but the whole point of the Bavaria SR41, which was launched at boot Düsseldorf in 2020 and is the blueprint for an entirely new range, is to combine the sporty aesthetic of the yard’s S-Line range with the more upmarket feel of the R-Line boats. It has succeeded.

This is the best looking sportscruiser Bavaria has built in some time, with Marco Casali of Too-Design employing some simple styling elements that make a huge difference to the boat’s overall looks.

The ribbons of hull window are long and sleek and the hardtop, an area where some previous models have been allowed to balloon out of proportion, has a much lower profile and blends attractively into the broad shoulders of the coachroof.

It’s a handsome machine and there has clearly been added effort to enhance the look and feel of the cockpit so it isn’t dominated by shiny glass-fibre mouldings. The table is teak-topped and sports substantial semi-circular handholds with built-in cup holders.

The wet bar has a teak top and black doors that match the black dashboard in a further effort to reduce the amount of white plastic on show. With the optional teak cockpit and classy Suntex upholstery it’s a nice place to be despite the unavoidable chill of a mid-winter sea trial.

Read our full review of the Bavaria SR41 in the April issue of MBY, out March 4.