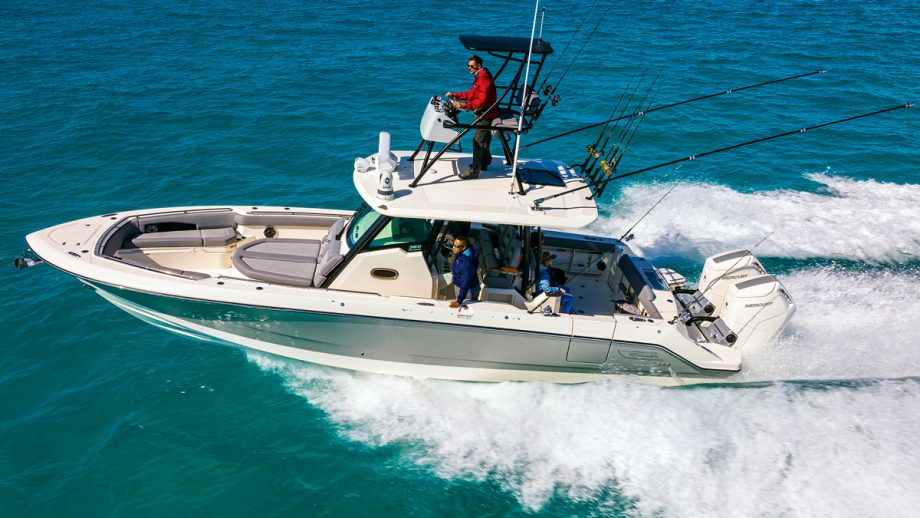 Reporting from the 2022 Miami Boat Show, Elliott Maurice takes us on a tour of the new Boston Whaler 360 Outrage.

Boston Whaler’s legendary reputation has taken another leap forward with this new Boston Whaler 360 Outrage. It is packed with the latest tech and looks superb in the flesh, especially with a pair of Mercury’s new 600hp V12 outboards hung off the back (triple 450hp V8s are also an option) for a top speed of over 50 knots.

Rather less obvious but equally interesting is Boston Whaler’s new Fathom lithium-ion battery system that allows all the electrical systems, including the air-conditioning, to run without the need for a separate generator.

This no-compromise approach to engineering also applies to the 360 Outrage’s design. Although a dual purpose weekender/sportsfisher, it is formidably well equipped for big game fishing, and beautifully built and fitted out.

The backrests of the aft-facing seats fold down to reveal a teak work top/bait preparation area, the aft bench tucks away to give access to a live bait-well in the transom, a cockpit side door makes it easier to haul in your catch (or for diving access) and there are multiple fish lockers under the deck.

You can also specify a tuna tower with a second raised helm position. Even without this option, the helm console is crowned by a substantial hard top supported by a sturdy aluminium frame that means there’s always something to hang onto.

Two flush-mounted 19in Simrad MFDs dominate the helm and use proprietary software to control and monitor all the ship’s systems, as well as state-of-the-art navigation, radar, sonar and a thumping JL audio system with zoned RGB lighting.

A bank of backlit analogue switches and glossy solid teak trim adds to the wow factor. In typical Boston Whaler fashion, the driving position is superb with three comfortable and very supportive helm seats and an ideal relationship between the throttles and the trademark stainless steel wheel.

Visibility is excellent, too, with a drop-down step to rest your feet on when seated or for an elevated standing view. The forward cockpit is equally impressive with
a good spread of seating and a large forward-facing sunpad that lifts to reveal another huge storage locker for the slot-in teak table, infill cushions and multiple covers.

A door in the side of the console opens to reveal a decent-sized overnight cabin. Cleverly, the foot of the double bed flips up to close off the sleeping area during the day, leaving the rest of the space as a self-contained day heads.

We haven’t yet had a chance to test it but given the flared bow, deep-vee hull and Boston Whaler’s reputation, we’d be surprised if it were anything other than a very capable sea boat.