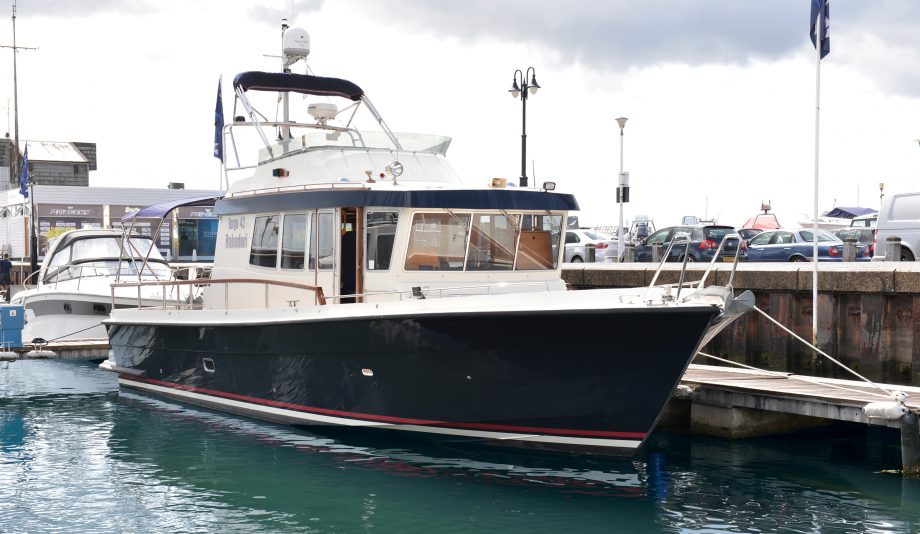 13 years after it was launched, Nick Burnham takes a closer look at the Botnia Targa 42, explains how it earned its reputation and what to look for when buying a used model

If you’d seen the 2008 Round Britain Powerboat Race start, you’d have been forgiven for thinking a nearby spectator boat had wandered onto the course. In amongst the low sleek race boats and serious high performance RIBs floated a lone upright cruiser – a Botnia Targa 42.

The only giveaways that it wasn’t there by mistake were on the vertical wheelhouse sides and roof – the race number 15. Helmed by Belgian Peter Vanhauter, the only upgrade from stock standard fitout was a change of props from G5s to G7s to give an extra couple of knots at the top end.

But the fact that this boxy, practical cruiser (referred to by the manufacturers as ‘the 4×4 of the sea’ and less kindly by some pundits as a ‘flying potting shed’) had the audacity to line up next to purpose-built race boats turned out not to be the big news.

It was Leg Two from Plymouth to Milford Haven in Wales, which took the fleet around the notoriously challenging Land’s End peninsula, that was the real story. With near gale force winds and huge seas, the leg was cancelled and the race boats loaded onto transporters to make the trip by road. All except one.

“Once we were round, the waves were coming from the Atlantic, so we had to surf them sideways. Then it became dark and we couldn’t see where the waves were coming from. So we revved up a bit and just to make it easier we put Barry White full volume on the CD player to create a certain atmosphere.” Peter and his crew arrived safely in Milford Haven at 3am and promptly threw a party!

As offshore boats, Botnias are legendary. Built in Finland, they’re made for serious boating and they attract quite a following from those who understand them. The Targa 42 was launched in 2006 in response to owners wanting to trade up past 40ft but retain all the qualities that made Botnia Targas so special – up to and including the drive configuration.

To read our full used boat report on the Botnia Targa 42, pick up the December 2019 edition of Motor Boat & Yachting, our November 7.