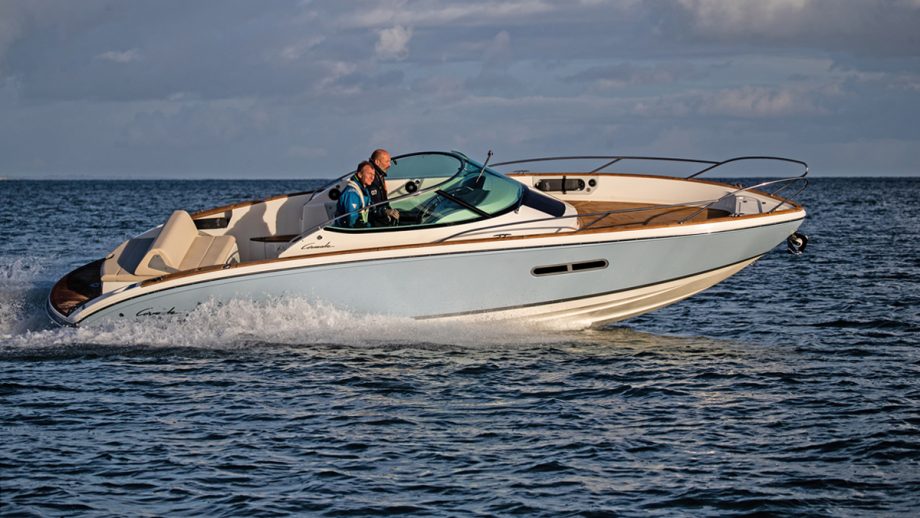 Reporting from the 2022 Southampton Boat Show, Motor Boat & Yachting editor Hugo Andreae takes us on a full tour of the Cormate T28...

One of the best days I’ve ever had on the water was driving this boat’s predecessor. The follow-up to the Cormate T27, the Cormate T28 was launched as an all-new model at the 2022 Southampton Boat Show.

Completely redesigned from the ground up, the T28 uses all the same principles and very similar styling to the T27. It’s a really attractive boat with lovely retro lines and a fantastic deep V planing hull. It is 25 degrees at the transom, which is very deep, but that’s what gives it such a lovely, soft rise and absolutely terrific handling.

The Cormate T28 is a Scandinavian design, built in Poland to a very high standard and powered by a single 6.2L 350hp V8 stern drive petrol engine from Mercruiser that gives a top speed in excess of 55 knots. A 600hp version is also available for speed freaks who want to crack 70 knots flat out.

As the name suggests, the T28 is 1ft longer than the old T27, and that means you get a longer bathing platform plus a slightly wider 8ft 4in beam, which allows for a bit more seating on board.

Key features in the cockpit include a pull-out shower and a bench with a moveable bolster, so you can face either forward or aft. The latter is particularly useful if you’re using the watersports tow pole.

Moving forward and there are built-in fender holders in the coamings and a solar panel forward of the windscreen to keep the batteries topped up. Below decks there is enough room for a cuddy cabin, sink and toilet, plus plenty of additional storage space.

However, the Cormate T28 is all about the driving experience out on the open water. We’ve taken this boat for a spin and will be reporting back on that very soon.

In the meantime, enjoy the tour…