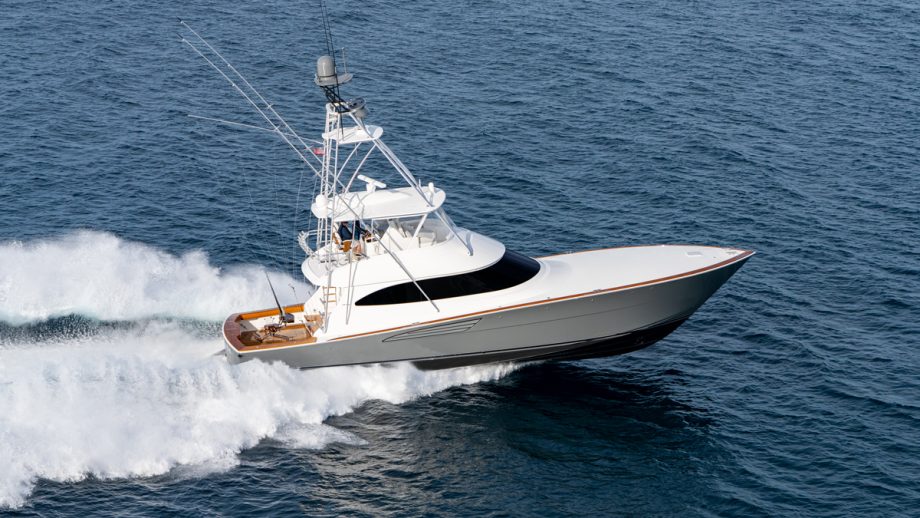 Reporting from the 2022 Miami Boat Show, Elliott Maurice takes us on a tour of the Viking 64 Convertible sportfish yacht.

Who can forget the scene from Spielberg’s 1975 fright-fest Jaws? The one where, at the first sight of the Great White, Sheriff Brody utters that immortal line to Quint: “You’re gonna need a bigger boat”.

It just might have been the inspiration behind Viking Yacht’s decision to supersize its award-winning 54 Convertible, into the new Viking 64 Convertible. Hull no1 made its global debut in November at the 2021 Fort Lauderdale Boat Show and at the recent Miami Boat Show, Elliott Maurice took the chance to take a full tour..

If you want to strike fear into the biggest fighting marlin or tuna out there in the big blue yonder, you want a Viking. This family-owned New Gretna, New Jersey builder has been turning out state-of-the art, big-game fishing “battlewagons” for more than half a century.

The new boat is a faithful recreation of Ernest Hemingway’s original but with modern engines and comforts. Photo: Billy Black
How Royal Huisman’s vast new 171ft sportsfisher will look when finished

But this new Viking 64 Convertible takes the concept to the next level. Using some serious new in-house Computational Fluid Dynamic software to refine the hull’s running surfaces, the big Viking is said to go through feisty waters faster and smoother. Not that speed is too big a concern when you have a pair of 2,000-horsepower, V12 MTU M96Xs turning the props.

While Viking hulls have always had the strength and rigidity of a Wells Fargo bank vault, the new 64 Convertible is the arguably the stiffest yet. The hull and deck are now joined with through-bolts every three inches and glassed-over from the inside for a stronger union than Barack and Michelle.

With the 64, Viking has also upped the luxury quota, realising hardy fishing folk want the comforts of home when the rods are stowed.

That means the option of an enclosed, air conditioned flybridge, air conditioning in the mezzanine “observation” cockpit, Seakeeper stabilising, and a quartet of spacious, high-luxe staterooms and a trio of heads.

Did we mention the 50-inch pop-up HD TV? Fighting fish has never been so stylish…