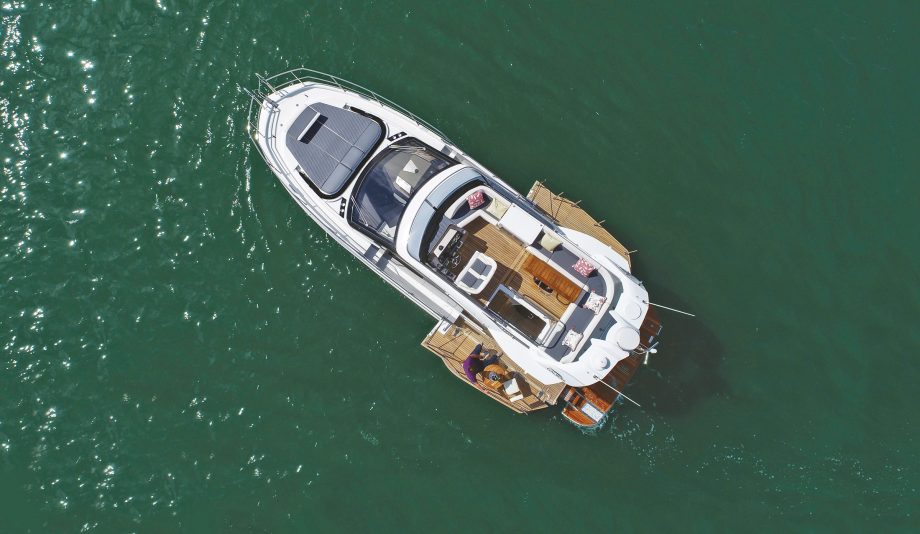 It’s the smallest model in the Galeon range to boast folding cockpit balconies but is there more to the 400 Fly than this performative party piece?

The well-trodden routine of dropping the anchor includes a crucial extra step onboard the Galeon 400 Fly. Once the usual depth checks, windlass operations and mark-taking have been dealt with, this important final stage is, within this class, unique to the Galeon.

This is not a first for Galeon, the Polish yard has been fitting balconies to boats for some time now, but the 400 is the smallest in the range to offer such gadgetry and, as I noted when I tested the 460 Fly a couple of years back, the smaller the boat the greater the benefit of the extra space on offer.

So popular are they as an extra (a £36,936 one at that) that the UK dealer has begun fitting them as standard, given that it has never sold a boat that has balconies as an option without them.

The balconies are only half the story when it comes to creating the best cockpit in the class, it’s how the designers have used the spaces around them that really makes it special.

The way the saloon opens up to the outside spaces is a prime example. The doors slide all the way across to port leaving the aft end of the saloon dinette exposed, which has a two-way backrest so a couple of people can sit facing aft and join in with those sitting around the cockpit table.

Better yet, this double bench pivots and locks in place to straddle the threshold between cockpit and saloon and create a more sociable seating arrangement. Two other key options fitted to our test boat that really make the most of the aft deck are the hydraulic bathing platform and transom wet bar.

The platform is a smart one, with a weight capacity of 400kg and built-in steps that open up as the platform descends into the water. The optional transom bar features a BBQ grill, chopping board, sink, and drained cooler.

These two additions in tandem with the balconies create a genuinely outstanding outdoor living space that would likely become the social hub of the boat in good weather.

Fast and fuel efficient, thanks to the space saving benefits of sterndrives the Bavaria R40 packs a lot into 40

Even the dinette has a couple of tricks up its sleeve; the starboard side backrest drops down to create a perch for putting on flippers, for example, and the aft end of the bench pops up to create a chaise longue.

The teak table drops on telescopic legs and with the addition of an in-fill cushion becomes a sun pad. The balconies can either be left open for easy access to the water from either side of the cockpit or, set up like they were for our shoot, with the poles and ropes in place (a bit of a rigmarole) and a table and chairs in situ so you can have a drink suspended over the water.

The effect is rather special, it has to be said, and it’s not something the boat’s immediate rivals can hope to compete with.

To read our full test drive review of the Galeon 400 Fly, pick up the November issue of MBY, out October 7.