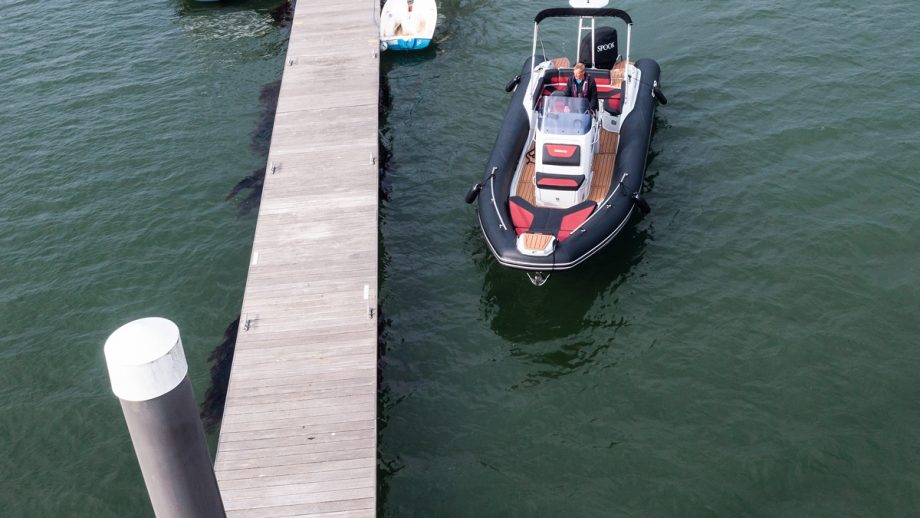 Coming alongside in a single-engined boat without a bow thruster can be one of the more difficult skills to master, especially on your own. Jon Mendez explains all...

If you’re new to the boat I’d always recommend establishing how many turns there are lock-to-lock on the steering before you try any coming alongside manoeuvres, then centring the helm and briefly engaging ahead and astern at idle.

That way you’ll know where the engine is directing its thrust and how much the boat moves when you use a single click of gear engagement in either direction.

For this demonstration of how to dock a boat we used a single-engined 7.5m (24ft) RIB, which behaves like any other small sportsboat, and two pontoons to practise on – a large hammerhead with an offshore wind to contend with and a mid-river pontoon affected by wind and tide.

The key here is that the angle of approach is not governed by a set number of degrees but by when you are able to balance the boat against the conditions using minimal steering or throttle inputs – this is your ‘start’ position.

You can now govern your approach speed using clicks of ahead, neutral and the boat’s natural momentum to bring you gently alongside.

When coming alongside with your bow to the elements, as you close the pontoon turn the wheel away from the dock and use a click of ahead to take the bow away from the pontoon while still maintaining enough momentum for the boat to carry on drifting towards it.

Once the bow has started to move away, go into neutral and turn the helm towards the pontoon so that when you engage astern to stop the forward momentum, it will also bring the stern in gently against the pontoon.

Ideally you will end up perfectly parallel and stopped alongside. If your stern ends up touching first, then you need less lock towards the pontoon; conversely, if the bow touches first, you need more lock towards it.

Neither of these is a big problem provided you have ensured the boat has come to a complete stop rather than impacting the pontoon while still moving ahead or astern. Boat fenders will help with any accidental contact but there is only so much impact they can absorb.

If you find yourself approaching downwind and tide, then you have two choices; either carry on past the pontoon then turn around so that you are coming in bow to the elements or moor stern to the elements by reversing back towards the pontoon.

This requires extra caution as the square stern means that it’s harder to get alongside. In this situation it’s often easier to put the stern line on before it touches the pontoon, make it fast and then use a click of ahead with the wheel towards the pontoon to bring the boat alongside.

If coming alongside single-handed, a mid-ship line is a good way to hold the boat alongside while you sort out lines. The key is to get that balanced start position nailed.