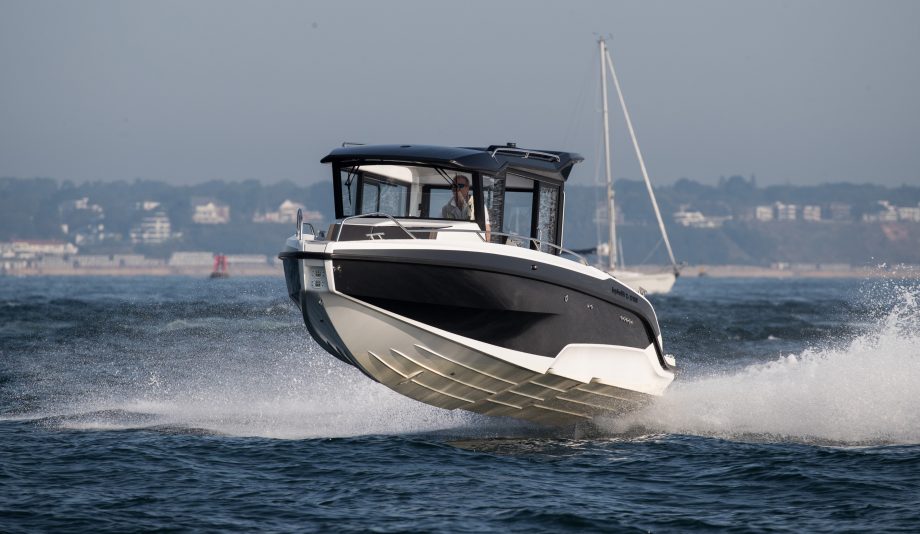 From stalwart of the sea to sporty SUV, pilothouse boats are encountering something of a revolution but the Hydrolift X-27 may be the most extreme example yet.

Pilothouse boats never used to be the sportiest of craft. Practical, yes. Seaworthy, yes. Good value, usually. But sporty? Not so much. However, change is afoot…

In much the same way that boring MPV cars morphed into sportier SUVs, so wheelhouse boats are evolving into something altogether more dynamic. Axopar went a long way to changing perceptions with its 28 Cabin and 37XC but now Hydrolift has taken it one step further with the most extreme sports utility vessel yet.

Not only is its latest craft called the X-27 SUV but with a claimed top speed of more than 70 knots (yes, you read that right the first time) the emphasis is firmly on the sports part of the acronym.

Speed comes easily thanks to the deep-vee twin step hull

Wisely, Hydrolift UK decided to order its test boat with a single 300hp Mercury Verado outboard rather than the twin 250hp or single 450R options but the spec still makes for tantalising reading.

The slender twin-step hull has a knife-like deadrise angle of 24° while its sandwich construction keeps the weight down to 2,300kg. The hull is the work of Norwegian powerboat racer and Hydrolift founder Bard Eker and is shared with the S-26 open sportsboat we tested last year. Impressive as that boat was, the X-27 SUV is more intriguing, partly because it can be used all year round and partly because it doesn’t look like it should be capable of those speeds.

Whereas the Brabus Shadow 500 Cabin screams performance from every pore, the Hydrolift X-27 SUV looks more like a run of the mill sportsfisher in the mould of a Jeanneau Merry Fisher or Finnmaster C8. Step on board and there are clues to its true intent; even with the pilothouse offset to starboard in order to leave a walkway down the port side, the X-27 feels narrower than most SUVs.

And that deep vee means it’s more sensitive to weight too – in fact the whole test boat leaned slightly to starboard at rest, presumably due to that offset pilothouse. The long drooping bow with its squared off snout and inset spotlight also hint at something more purposeful than the usual tall stubby bow needed to maximise space down below.

In fact, with no access to the lower deck from the pilothouse, you could be forgiven for thinking that overnighting wasn’t an option on the Hydrolift X-27 – we’ll come to that later.

Then there’s the helm with its deep bucket seat, designed to support your hips whether standing or seated, and sporty three-spoke wheel. The really quick ones even have racing style controls with separate levers for the gears and throttle. It all speaks of a more driver-focused boat than the average pilothouse craft.

Read our full review of the Hydrolift X-27 SUV in the January 2021 issue of MBY, out December 3.