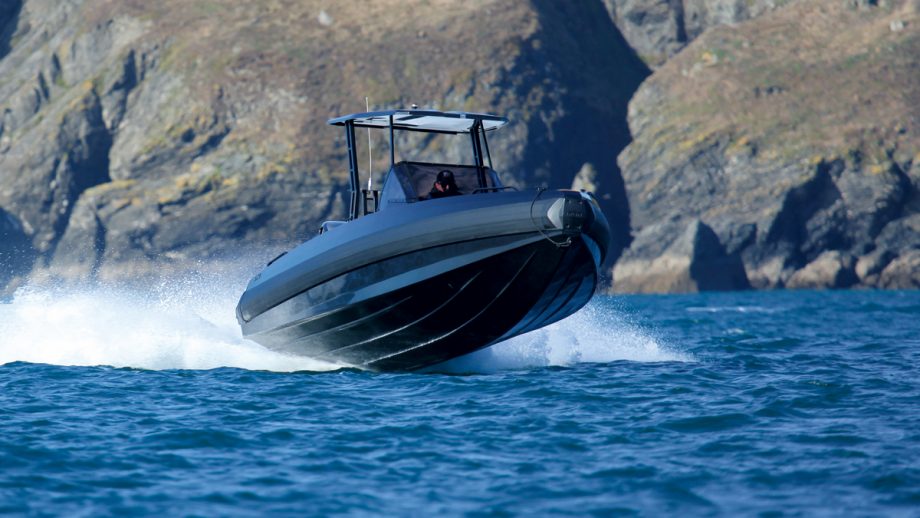 If you want top-flight performance for mid-range money, this Swedish 50-knot thoroughbred is a boat you need to see. MBY's Alex Smith takes a test drive of the Iron Boats 827…

Swedish brothers, Lars and Henrik Peterson, own and run one of the world’s most prolific RIB businesses. They shift a lot of boats and they talk to a lot of boaters so they understand what their RIB customers want.

And perversely, what they appear to want is not a RIB at all. It’s a stable, high-volume open sportsboat with outstanding sea manners and a confidence-inspiring wraparound fender to take the stress out of close-quarters work.

So the Peterson brothers set about building it. Under development since 2016, in close collaboration with the alchemic minds at Mannerfelt Design, their solution has now landed in the UK.

The basic idea is simple. You take a hard sportsboat with a high-performance hull and wrap it in a thick rubber fender that lends it the style of a RIB while providing a more spacious cockpit and uprated impact resistance.

The fender itself is of course key to the success of that approach – and while it took a long time to source a manufacturer who could build it, the result looks good.

Measuring 30cm in depth, it wraps around the boat’s periphery about halfway up the hull sides, keeping the weight usefully low and putting the point of impact in exactly the right place for nestling against a pontoon.

The rubber used in its construction is UV-resistant and non-marking so you can raft up alongside shiny white yachts without scuffing the gelcoat.

And while it doesn’t provide the buoyancy of a regular inflatable RIB collar, this boat still has the ability to carry nine people, as well as a very purposeful aesthetic that both RIB and hard boat fans are likely to appreciate.

If Iron Boats could just find a way to extend the fender further aft and taper it so that it wraps around the exposed edge of the aft swim platform for approaching astern, that would be even better.

Read Alex’s full review of the Iron Boats 827 in the January 2023 issue of MBY, which is out now.