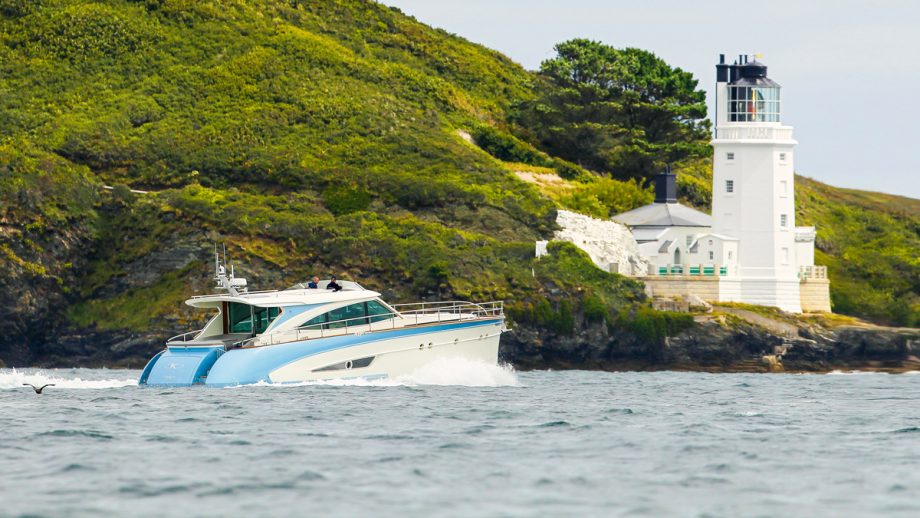 When the grandson of Donald Healey builds a motor yacht, the result is just as arresting as the famous eponymous sports car with its two-tone paint...

You might not know the cider – or cyder, as they say in Cornwall – but you probably know the name.

According to David, as well as being a fine engineer and world-renowned motor sports star – he won the Monte Carlo Rally in 1931 – Donald was a classic example of what used to be known as a tinkerer.

He has a childhood memory of his grandfather fixing a troublesome door by designing, making and installing a pressure switch under the mat to open it automatically.

On another occasion, David remembers, he found that his grandmother’s best teaspoons had been modified with a hacksaw into the ideal shape for eating grapefruit.

David, 65, is happy to see himself as a chip off the old block, as he explains to me when we meet on board the boat in Falmouth. Like his grandfather, he seems to be a man always in need of a project of some sort.

The family firm he founded back in the Eighties started out as an off-licence, but it was soon also making its own cider, and then growing its own apples, and now distils its own whisky, brandy, and gin as well – producing the base spirit for the gin, naturally enough, from apples.

So when David handed over the reins of the company a few years ago to his sons, Joe and Sam, he realised that he would need something else to do, if only to avoid making a nuisance of himself by bombarding them with unwanted advice and suggestions.

The Mulder Healey is the result. Most retired people who want to go cruising would look at the boats available in today’s market and probably feel that they were spoilt for choice.

Not David. Reminding me that as well as an automotive engineer, his grandfather Donald was also a boatbuilder – Healey runabouts were very popular in the Fifties and Sixties, with more than 1,000 built – he had some very specific ideas of his own.

“I wanted a boat that was capable of maintaining 20 knots in two-metre seas, in style and comfort,” he recalls.

There are plenty of boats that can fulfil the first part of that brief – lifeboats, pilot launches, the ‘very slender vessels’ used by special forces – but very few that can do so while also satisfying the second.

To read Alan’s full report on the Mulder Healey, pick up the February issue of MBY, which is out now.