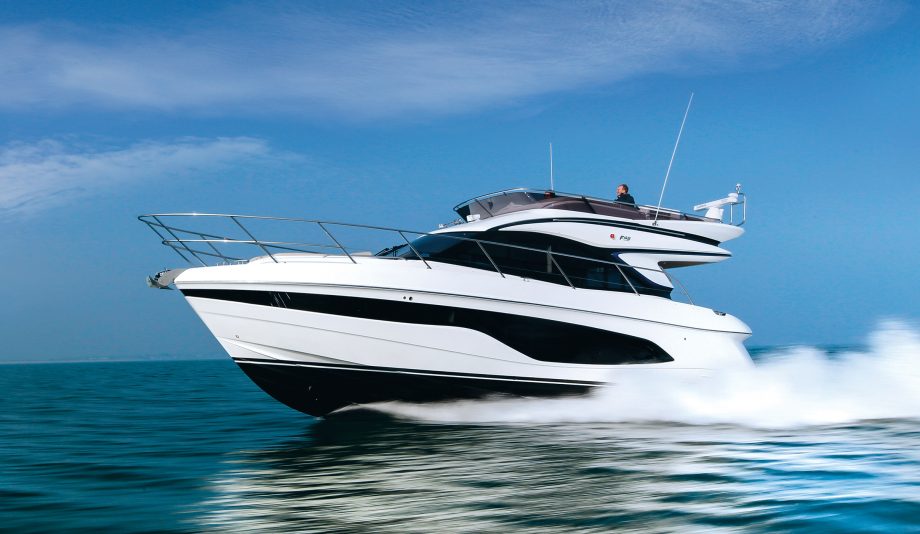 MBY Deputy Editor Jack Haines gets behind the wheel of the Princess F45, which is the first rung on the Plymouth yard's flybridge ladder, but by no means the poor relation.

Getting hold of boats to test can be a complicated business because there are many factors at play. Production at a shipyard like Princess is a well oiled machine with every boat on a drum-tight deadline to make it through the build and testing process before being shipped off to a dealer or customer.

There sometimes isn’t enough slack in the system for a boat and chase boat to be ready with the correct crew all at the same time. That is why, even though the Princess F45 was launched at the 2019 Düsseldorf boat show, we only managed to test one in early 2021 when Boats.co.uk had a spanking new stock boat delivered to Poole and extended an invitation for us to have a go. Invitation accepted.

Why is the F45 such an important boat for Princess? Firstly, it is the first rung on the ladder of the Princess flybridge range and therefore has an incredibly high standard to live up to. Despite being the least expensive flybridge in the range it cannot feel that way. It also has a crucial role in attracting new customers to the brand and, Princess hopes, setting them on their way up the ladder to larger and more expensive craft.

Secondly, it is the successor to the Princess 43, which itself was based on the astoundingly good Princess 42, one of the most popular and successful boats that Princess has ever built. No pressure then. First impressions are really rather good. The well-founded Princess Yachts and Olesinksi design studio collaboration has worked its usual magic on the Princess F45 but this model has also been breathed on by Pininfarina.

This has softened the lines even more and introduced some delightful curves to the boat’s exterior, most notably around the transom and aft end of the flybridge. The latter can often be a forgotten area of the boat, left plain and uninspiring, but the subtle curves around the radar arch and a finish so smooth it could almost be liquid is a lovely bit of design.

An electric-blue band peeps out from the flybridge coaming, mirrored above by a black strip which plunges towards the windscreen, tricking the eye into lowering the boat’s profile so it doesn’t appear top heavy from side on. The hull glazing – knife shaped and eating great chunks out of the GRP around it – meets beneath the anchor like a thin glazed moustache, giving the boat an unmistakable ‘face’ when it comes at you bow-on.