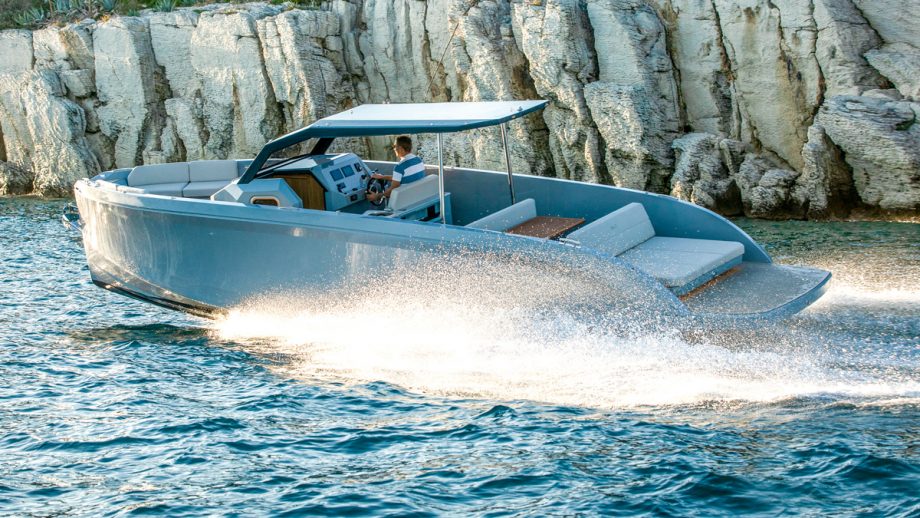 Looking for big boat fun with a small boat footprint? Rand’s new flagship, the Rand Escape 30 might be just the craft you’ve been waiting for…

When a company builds lightweight, eco-conscious electric boats, it’s easy to pigeonhole it as a one-dimensional regatta specialist, capable of nothing but gentlemanly inland launches for the wealthy and the well-heeled.

Having first become acquainted with Rand through its rental-friendly Picnic 18 model, I have to confess I was guilty of exactly that. But Rand has come a long way in the last five years. It’s gone from building 250 boats in 2021 to 450 boats in 2022.

It expects to increase that again to around 1,500 boats by 2026 and it also now operates its own manufacturing plant in Croatia, where its eight-strong fleet spans everything from the modestly evolved Picnic 18 to the new flagship Rand Escape 30.

Each model is very clearly focused on a specific application, but crucially, it’s no longer just about clean, quiet electric propulsion for the rental market. It’s about recreational sea boats, as well as inland runabouts.

And it’s about inboard petrol and diesel options, as well as outboard motors, alongside a range of electric solutions that includes an all-new proprietary sterndrive system.

Sadly, the Cannes Boat Show came too soon for us to see that much-anticipated electric powerplant in action, but what we did see from Rand was more than enough to pique the interest.

In the context of the Rand fleet, the core purpose of the new Rand Escape 30 is multi-purpose day boating. In fact, Rand has gone as far as to describe it as “the ultimate hangout space,” so its base layout makes perfect sense.

It uses a centre console with unbroken walkaround side decks and a deep-set cockpit with an aft sunbed, a forward wet bar and a fully convertible six-man dining station at its heart.

By reversing the backrest of the aft-facing bench, that central dining area is then able to supplement the two-man helm to provide no fewer than eight forward-facing seats aft of the console.

Read Alex’s full review of the Rand Escape 30 in the December 2022 issue of MBY, which is out now.