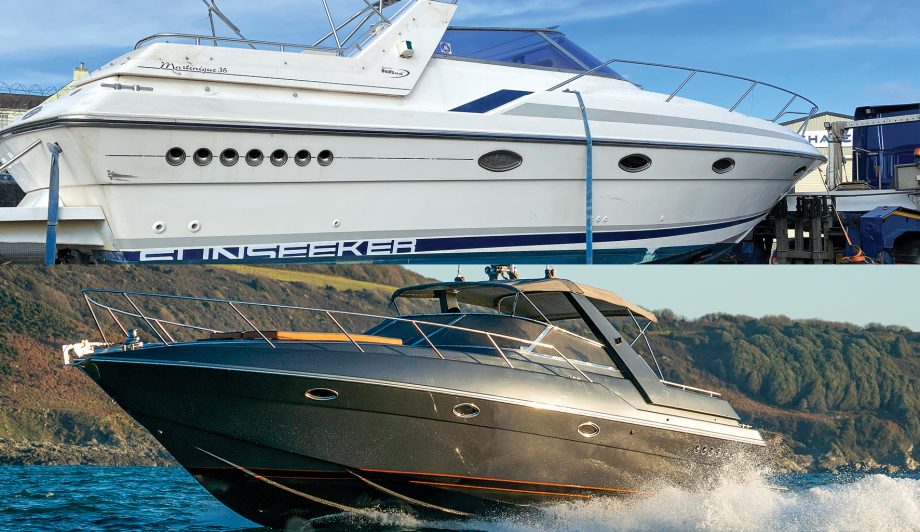 When Paul Eccles and David Watson decided to do up a neglected 30-year-old Sunseeker Martinique even they had no idea quite how spectacular the end result would look.

“I’d love to say that buying and restoring a Sunseeker was always part of some big life plan but the reality is that I needed somewhere to live,” explains Paul Eccles.

“I’d recently separated from my wife, and Yacht Solutions, the business I’d set up with my friend and former colleague Dave Watson, was still in its infancy. Rather than buying or renting a house, living aboard a boat seemed like a better option.

“As well as saving me a small fortune on accommodation, we could use it as a demo boat for the business and at weekends it would be a great way to spend time with my teenage sons.

“Having both worked at Princess Yachts prior to setting up on our own, I’d initially been looking at older Princesses but something about the Sunseeker caught my attention.

“It had a nice simple layout with a big cockpit and two decent cabins as well as those classic Sunseeker lines. And I have to admit that the heritage and bragging rights that come with saying you own a Sunseeker appealed to me. Even the name amused me – Ship-Faced!

“We drove up to Essex to take a closer look and find out more about the boat’s history. Apparently it had spent much of its life in Mallorca before being brought back to the UK by its current owner. It had been sitting ashore for quite a while since then, which probably hadn’t helped its rather sad looking state.

“The hull graphics were badly faded, the perspex screens were crazed, the cockpit upholstery was sodden and the decks were grimy, but the hull itself was sound and mercifully the interior was dry and leak free.

“The dated fabrics, worn carpets and 30-year-old galley didn’t really look like the kind of place I wanted to live but I could see the potential in it.

“We didn’t know for certain what state the engines were in but they didn’t appear to be seized and came with a fairly comprehensive service history.

Read Paul and David’s full story in the April 2021 issue of Motor Boat & Yachting, out March 4.