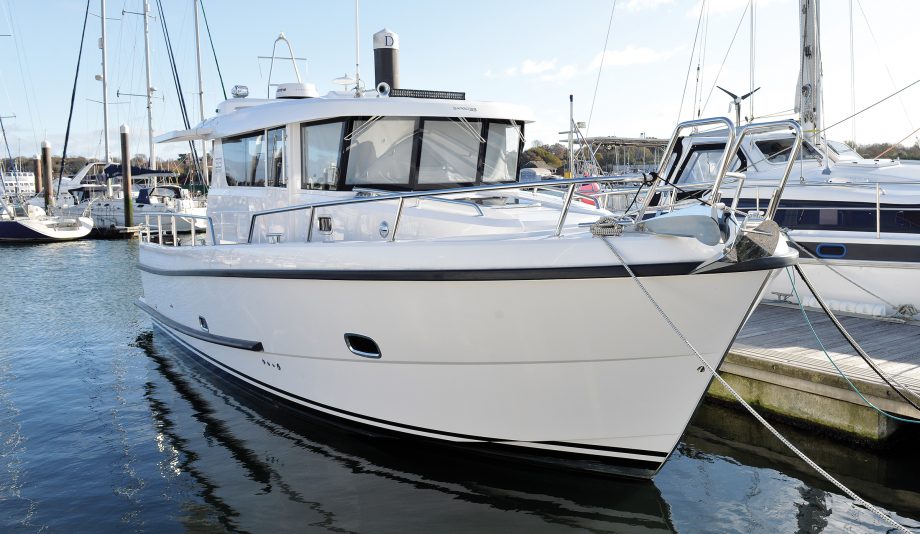 Our resident used boat expert Nick Burnham explains how to pick out a good Sargo 33 on the secondhand market.

Simply due to sheer volume and popularity, many of the used boats we feature are built by large organisations often employing thousands of people, so it’s nice to occasionally show a boat from a smaller and slightly more niche manufacturer.

Sargo is a case in point. Edy Sarin started building boats under the Minor brand over 50 years ago in Ostrobothnia, situated along Finland’s West Coast. He and his wife Lillemor developed both the range and the business, which has stayed firmly within the family, now headed up by their son, Thomas Sarin.

In 2014, Thomas brought out the largest model yet, the 36 and also changed the brand name to Sargo to reflect the brand’s ever increasing global reach – Minor doesn’t translate well into some languages. The Sargo 33 was launched to the public in 2016 at the Helsinki Boat Show (it had been revealed to the press earlier that year at the biennial Finnboat event) to bridge the gap between the Sargo 31 and the Sargo 36.

A combination of solid hull, punchy performance and a cosy wheelhouse make the Sargo 31 a fearsome year-round, fast passage

Two feet doesn’t sound like it would make much difference but the extra volume created by both the added length and beam (up from 10ft 8in to 11ft 4in) create a markedly different feel, and in truth the boat is closer in concept and execution to the 36 than it is the 31.

“We wanted more of a family boat with this model,” Thomas Sarin tells me. “With the 33 we were able to increase the wheelhouse size to create more seating, but also the galley is far larger in the 33.

“The other thing that changed was a door in the rear bulkhead of the wheelhouse giving direct access from the aft deck instead of having to use the sliding side doors further forward,” (in fact the aft door later became an option on the 31).

The ethos however, remained exactly the same, a rough, tough ‘Tonka Toy’ of a boat designed for all-weather, all-season boating almost irrespective of conditions – precisely the elements that attracted Robert Barker, owner of the boat you see here, which replaced an Elling E4 in a quest for more speed. “It’s tough, chunky and it looks fantastic,” he remarks. “And it performs well”.