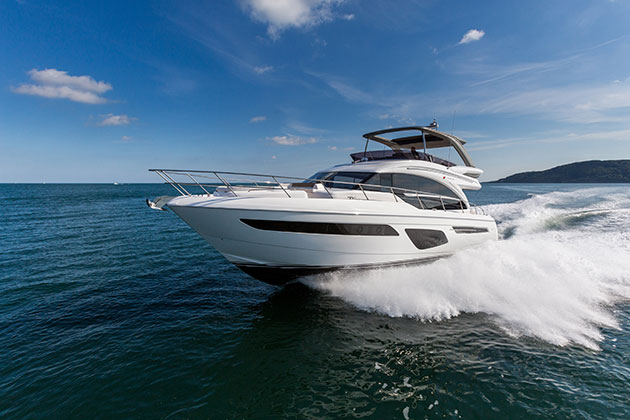 Clever styling, astonishing amounts of space and a host of neat details give the Princess 62 exceptional showroom appeal. So what’s it like on the water?

The recent Princess S Class series of boats is perhaps the finest marketing strategy since Otto Frederick Rohwedder of Davenport, Iowa, figured he was on to a winner with a machine that cut loaves into slices.

This is what floats around my head as we navigate the Hamble River, eight hours and 150 miles into my introduction to Princess’s latest flybridge cruiser, the 62.

In fact, it is the second philosophical thought of the day. The first was, ‘Is Andy Lawrence, Princess head of design, a genius or a just a master illusionist?’ The question occurred to me as I approached the stern of the Princess 62, because it looks fantastic – and it’s only when you stand next to it that you realise it stretches up into the clouds like the Burj Khalifa.

It’s taken some clever penmanship to make such a tall boat look so good, and it starts right at the top. “Traditionally, hardtops have been added late in the design process,” Andy tells me. “But we incorporated the hardtop into this design from day one. We also put a lot of work into slimming the pillars that support it and integrating them into the design.

If you look at the aft pillar, instead of being a separate entity, it segues smoothly into the roof – it’s one complete curve.” Andy’s visual alchemy doesn’t end there
– the boat is a smorgasbord of carefully considered radii.

There’s the moulded accent line that bisects the flybridge side, stretching from the top of the windscreen back to the trailing edge of the cockpit overhang, visually lowering it without compromising practicality or integrity. Massive side windows are split by a ‘floating’ GRP spar – it isn’t connected at either end.

In fact, it’s purely cosmetic – the windows are one piece. Andy tried deleting it altogether in the design stage but it just didn’t look as elegant apparently.
Lower your eye and you’ll spot two more swage lines in the hull topsides, one arcing powerfully forward from the bathing platform, the other discreetly linking the top of the engine vents with the sabre-like slash of forward hull windows.

Read the full report in the December 2017 issue of the magazine.