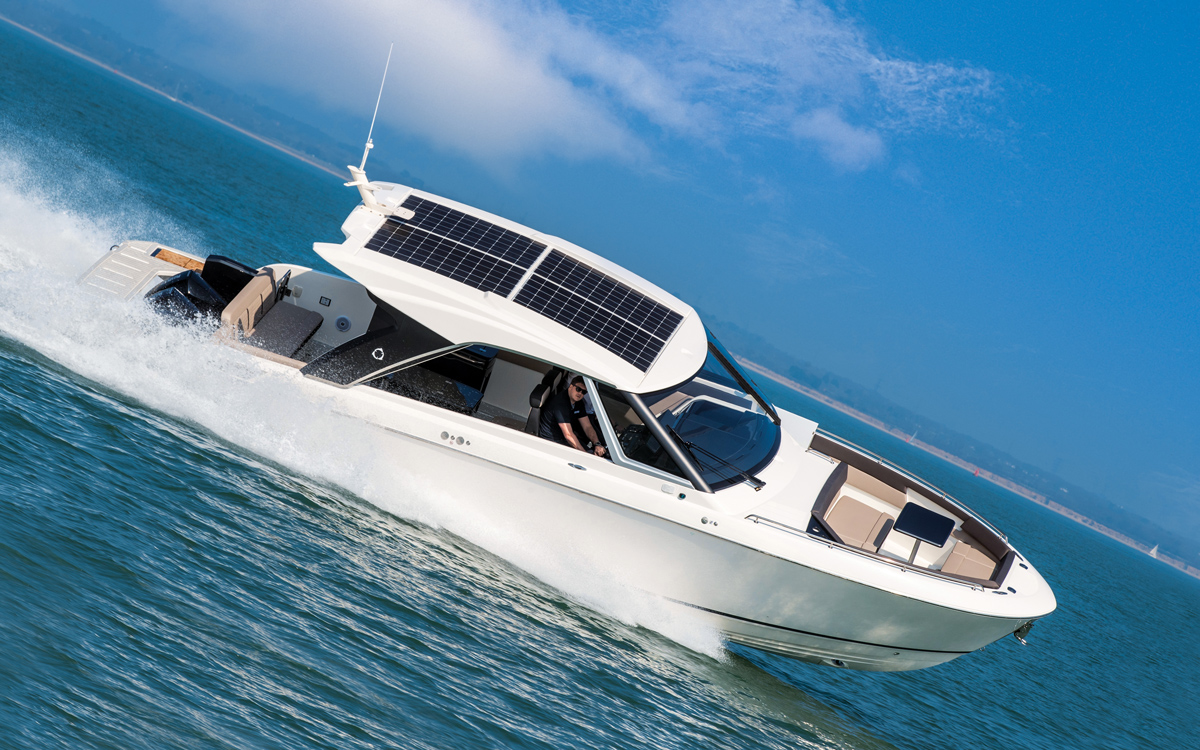 Jack Haines takes the sporty, yet fuel-efficient Greenline NEO for an exhilarating test drive in the Solent

Having not been in the cockpit of a fighter jet during a full lock turn I can’t say for sure what it feels like but it can’t be that dissimilar from doing the same aboard the Greenline NEO.

Under instruction from our snapper Richard to “crank it hard over”, the sea looms up close enough for me to lean over and dip my hand in it as I pin the throttles and flick the wheel hard to starboard.

We are in a near deserted Solent on a warm spring day and the Greenline NEO is in its element. On the cruise over from the Hamble we clocked a comfortable 40 knots and at 25 knots the engines melt into the background, draining petrol from the tank at a rate of around 90 litres per hour.

There’s no penalty for dialing up the speed either, in fact the optimum range and fuel efficiency comes at 5,000rpm and 32 knots, a speed at which the boat feels happy to cruise courtesy of the twin 250hp Mercury V8s.

You can upgrade to twin 300hp V8s but they’re not a must-have, the 250s – on this boat with a heavy spec including the hi-lo platform – feel perfectly punchy and strike a good balance between performance and economy.

There are smaller engine options too and you might just get away with the twin 200s on the Open version, but the twin 150s are unlikely to be that appealing on the used boat market a few years down the line.

The Greenline 39 Hybrid represents a fresh start for the Slovenian yard, we put it to the test - hybrid

This being a Greenline there is a more eco-friendly version with a pair of Torqeedo Deep Blue 80 outboards and two 40kw/h batteries from a BMW i8 but its eye-wateringly expensive (approximately £85,000) and gives a mere 20nm of range at 6 knots.

The NEO is an easy boat to drive quickly because it’s natural running attitude is so neutral and any stress of trimming correctly is handled by the excellent Zipwake system, a £3,100 option that is well worth adding. Set the stabilisation system to auto and the interceptors will react in seconds to keep the boat as evenly poised as possible.

The steering is quite heavy and feels a little cumbersome at displacement speeds but that weightiness is welcome as the velocity increases and you don’t constantly have to make tiny adjustments to the wheel.

The fighter jet-like leaning takes some getting used to at first but once you find the extremes of the turn it soon becomes clear that though the heel is alarming the amount of grip is resolute. The stern doesn’t slide an inch under hard cornering and even when we were pulling some properly silly manouevres for the camera the hull didn’t feel like it had a tendency to skip or catch.

It’s enormously good fun but it feels safe and accessible. Solid, too, with that hard top overhead, a walk-through windscreen and a table in the bow cockpit I expected there to be a fair amount of rattle and shake coming off waves but the boat feels reassuringly rigid. It was a calm day but we took some heavy landings off the wake of our 45ft chase boat and the hull stood firm.

Greenline has clearly thought about the little touches at the helm and there are numerous highlights that make driving the NEO that bit more pleasurable. The driving position itself is set good and high so there is an excellent view all round.

The three identical forward facing seats are well padded and body-hugging but comfortable for longer stints and all three have lift up bolsters giving the option to stand and lean. Frankly, the seated position is so comfortable you won’t need to stand unless it really kicks up.

The Hardtop version we have on test has a great combination of shelter and exposure, the roof overhead giving way to completely open sides so there is ample ventilation and a connection to the water that the fully enclosed Coupe version can’t match.

It’s a shame that there isn’t a sunroof or even some opening hatches but this would mean shrinking the size of the standard solar panels on the roof. No, Greenline hasn’t completely abandoned its hybrid pretensions and the panels mean that, when teamed with the standard inverter, you can run the fridge, grill and 240V sockets without needing a generator.

Read the full review in the June 2019 edition of MBY.