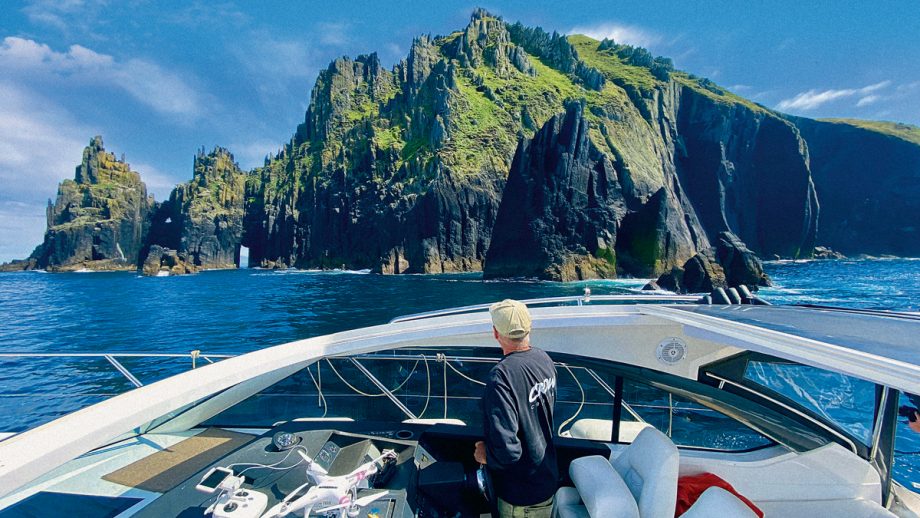 After making their way around the southwest corner of Ireland, John and River explore the wild Atlantic coast and its outlying islands...

This is Part Two of John’s round-Ireland adventure. Make sure to watch Part One and Part Two first.

The next destination on my trip down memory lane was the Skellig Islands. These two uninhabited islands lie about ten miles offshore more or less due west from our last overnight berth in Derrynane.

On the summit of the main island, Skellig Michael, early Christian monks built beehive stone huts and dedicated their lives to God in this wild and lonely outpost.

They believed they were on the very edge of the world and it’s not hard to see why. Some 640 steep steps, hewn from the rock, climb from the only possible landing on the island up to their settlement and are known locally as the Stairway to Heaven.

Little Skellig, although smaller, is far more visible from a distance, shining white on the horizon due to the guano accumulated over millennia of around 35,000 pairs of gannets – the second biggest colony on the planet.

Both islands plunge sheer and deep into the Atlantic and both are awe-inspiring, atmospheric places. Fifty years ago, only two tourist boats ever visited The Skelligs, the one from Derrynane that I worked on and another from Valentia further to the north.

In his latest cruising feature, Peter Cumberlidge picks out the best remote island destinations you can easily reach from the

My skipper would drop the tourists and then, while they were climbing up to the monastery, scuba dive to gather sacks of crayfish from the steep kelp covered walls of the island.

Naively, I’d expected things would be much the same today, so my plan was to drop River on the island to get some shots – I’ve landed there many times, but it would be his first time – and I’d hang off while he climbed.

The water is so deep there is no chance of anchoring and no moorings. We’d left Derrynane early so we’d get the island to ourselves. But while I was assessing whether or not it was safe to drop him on the small landing due to the rolling swell making it rather precarious, a tripper boat arrived, then another, and another…

I backed off and left them to it. While we filmed the gannet colony on Little Skellig I counted no fewer than 18 boats. And as we headed away from the islands north towards Portmagee, still more were arriving.

The fact that the island has been used as a location for both The Force Awakens and The Last Jedi Star Wars films was the main attraction, rather than its powerful magnetism as a place of wondrous history. Some of the trippers were even wearing Star Wars costumes!

Read Part Three of John’s Irish adventure in the February 2023 issue of MBY, out January 5. Music courtesy of Bensound.com