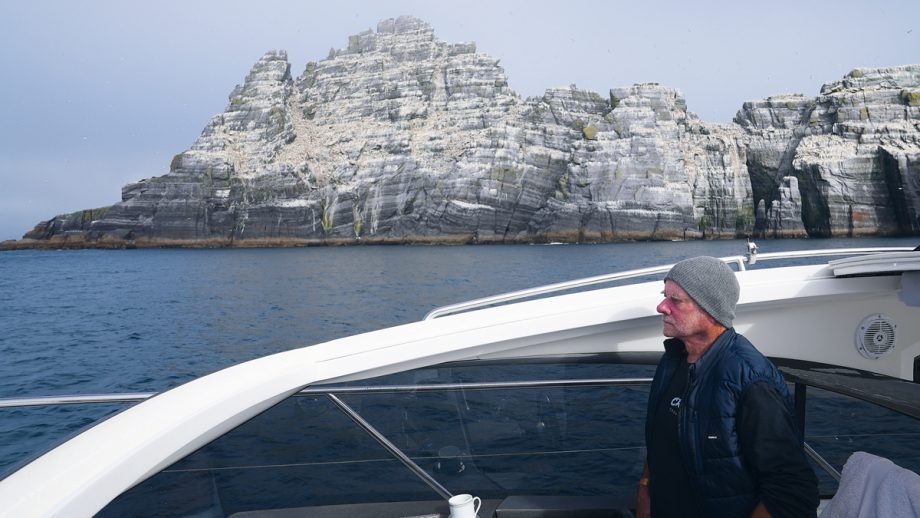 After crossing the Irish Sea and leaving his Princess V39 Cecienne in Kinsale Harbour, John Boyle heads south-west along the remote and beautiful coastline of County Cork...

This is Part Two of John’s round-Ireland adventure. Make sure to watch Part One first.

After weeks of checking weather forecasts, the perfect weather pattern was emerging – a huge high pressure in the mid Atlantic that appeared to be stationary. It was time to jump on the Aer Lingus flight back to Cork and continue our exploration of South West Ireland.

A quick tip about air fares – try and book as far ahead as you can, even if just an extra day. When I checked Monday’s flights on the Friday afternoon they were available at £82, when I booked 12 hours later they had jumped to £213!

I can go for a couple of weeks at home without seeing our Princess V39 Cecienne, but walking along the pontoon in Kinsale towards her felt like catching up with an old friend.

We’d caught the evening flight so we only had time for a quick pint and then an early night – we’d left her fully fuelled and topped up with water, so she was raring to go. I’d not known how long we’d be leaving her in Kinsale, but we’d got lucky.

Stephen at Castlepark Marina is one of those marina managers who knows his customers. Of course, the marina was full for the summer and my requests for “a berth for a month, maybe more” had been universally rejected by other marinas in Cork and Kinsale. But he knew that he’d be able to juggle and squeeze us in.

Read Part Two of John’s Irish adventure in the January 2023 issue of MBY, which is out now. Music courtesy of Bensound.com