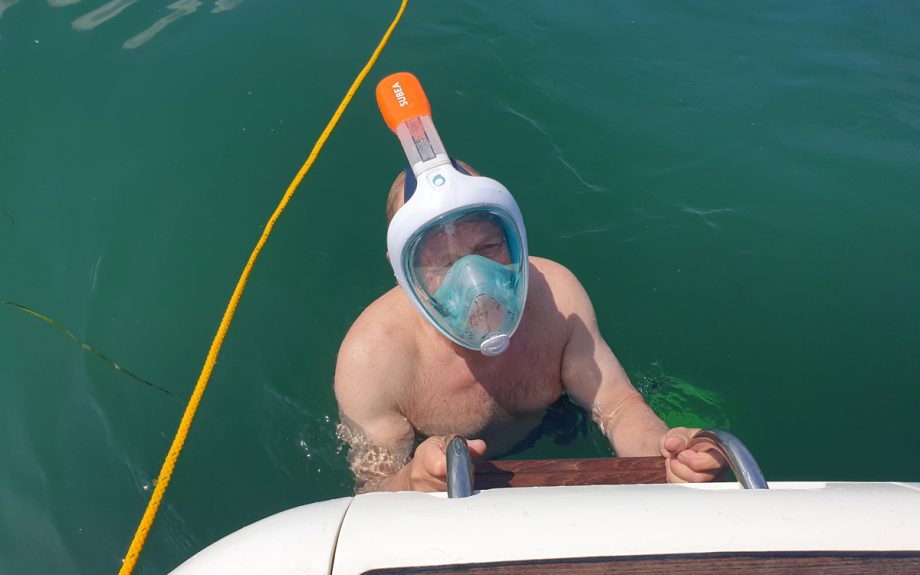 What better way to test a snorkel called 'Easybreath' than to plunge into the chilly waters of the Solent to discover how it copes with involuntary gasps and splutters?

For our trial, we headed to Osborne Bay, just off Queen Vic’s bolthole on the Isle of Wight, on an uncharacteristically balmy early summer’s day.

The mirror-calm water was inviting and the mercury was rising aboard the boat, but despite the positive omens the Bramblemet weather station was reporting a sea temperature of just 16.8° Celcius – more than enough to cause a sharp intake of breath by any measure.

The first part of the experience demonstrated just how efficient is the snorkel’s ‘Dry-top’ system, courtesy of its on-board ‘buoy’.

Designed to prevent water coming in should the wearer take a gulp while underwater, the Subea Easybreath immediately locks off the air supply at the moment of submersion. Upon resurfacing, blow out and the buoy is released.

Whether a trickle did get through on our test, it’s hard to say. For if it did, the automatic purge valve fitted to the mask did its job well – we did not notice any water ingress.

Before jumping in, we had adjusted the Subea Easybreath’s head straps – which form an ‘X’ shape across the back of the head – so the mask sat comfortably without putting too much pressure on the face. A gentle tug of the adjusters was all that was necessary.

We deliberately didn’t press the mask to the face, scuba diver style, upon entry to see what would happen – answer, nothing; the snorkel stayed put.

The remainder of our trial was unremarkable; the Subea Easybreath performed admirably to the point where you could almost forget you were wearing it.

Just one point to note is that we only tested the mask while surface swimming – the Dry-top system only works while the snorkel is vertical, meaning it may let in water during duck dives or free diving.

Given that Subea Easybreath’s designer and retailer – the sports outlet Decathlon – spent seven years perfecting the product, its performance should not come as a surprise.

Our only criticism is that despite the snorkel’s clever construction of separate areas for vision and breathing, we did experience some fogging initially, possibly due to the coldness of the water.

So for our second plunge we tried rubbing a little washing up liquid into the inner lens, which fixed the problem completely.

After that, everything went swimmingly…

Buy it now on Decathlon.co.uk

Buy it now on argos.co.uk