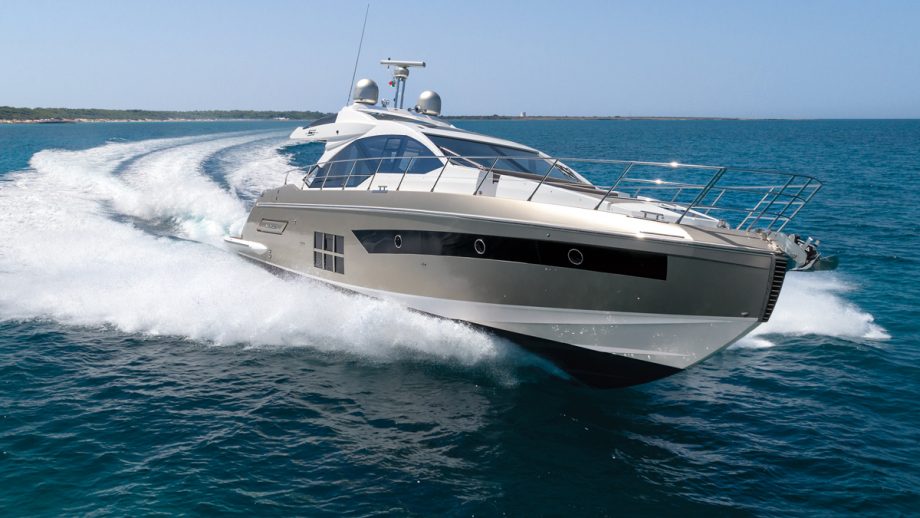 Azimut Yachts introduced the Sportfly version of its striking S6 model in 2020 and we recently got a chance to step on board. Following on from the 2018 launch of the Azimut S6, the S6 Sportfly neatly incorporates the extra deck, which features a swathe of sunbathing space and a second helm station.

Access to the top deck is via a ladder that retracts neatly into the flybridge overhang when not in use. As with the standard Azimut S6, carbon-fibre is used throughout and extends to the top deck on this version to minimise the effect of the extra height and weight incurred by the extra deck.

From the sun deck down, the boat is identical to the S6, with a sprawling cockpit, galley-up layout and three generous cabins on the lower deck, including a full-beam owner’s cabin ensuite.

A triple IPS installation (of 550hp per engine) leaves enough room for a generous double VIP cabin forward with space ahead of it for the crew quarters and a tender garage at the stern.

The S6 models aren’t the first in the S range to use a triple pod drive installation and though there are three engines and three pods to look after, Azimut insists that triples offer the best balance of performance, economy and handling for a boat of this size.