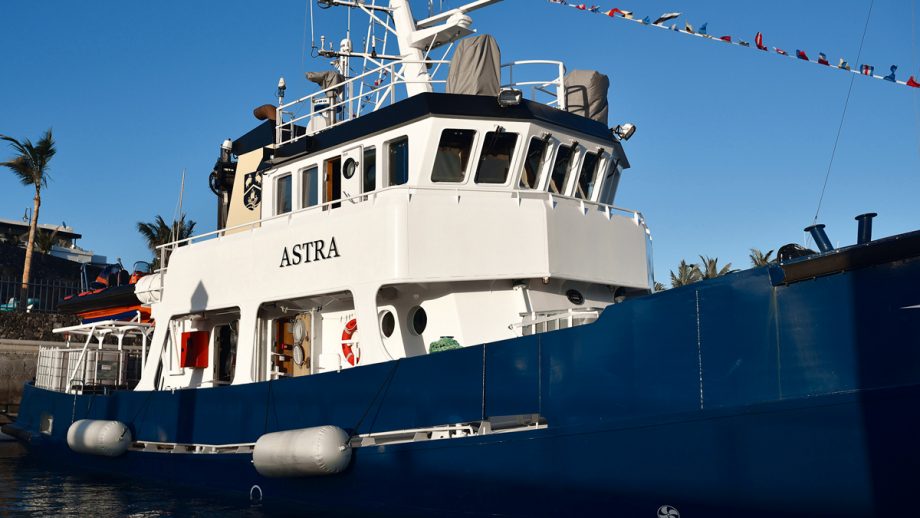 Iain Macneil and his crew set off from the Canary Islands on 1 December aboard their converted Swedish search-and-rescue vessel MV Astra and moored back up in the same spot this morning (1026 UTC, May 16).

MV Astra is the first sub-24m motor-powered vessel to circumnavigate the globe via both southern capes, making this a new world record. To qualify for the record they also had to cross the equator twice and cover all 360 degrees of longitude.

The journey of around 27,000nm took just over five months, and started and finishing in the Puerto Calero, Lanzarote. Their route will passed south of the Cape of Good Hope (South Africa), Cape Leeuwin (Western Australia), South Cape (New Zealand) and Cape Horn (Chile).

Despite it being summer in the southern hemisphere, the Southern Ocean is still extremely treacherous. Iain Macneil is a former Merchant Navy seaman and now CEO of Edinburgh-based maritime publishing company, Witherbys.

He spent years meticulously planning the circumnavigation and even bought a test vessel to hone his ideas after reading about it in Motor Boat & Yachting.

Following retirement she was converted into a go-anywhere explorer yacht. The most obvious changes include a Portuguese bridge, a larger crane and the addition of a pair of Ribcraft tenders.

Measuring 76ft 7in (23.35m) overall but with a waterline length of 69ft 5in (21.21m), MV Astra has a full-displacement steel hull and an aluminium superstructure.

Powered by its original 1,350hp Mitsubishi main engine spinning a controllable-pitch propeller, it has a gentle-seas range of around 5,000nm at 8.5 knots. A Volvo auxiliary engine provides back-up.

“Having now owned Astra for a year and cruised over 9,000nm aboard, I believe she is one of the most capable motor vessels of her size in the world,” Macneil said prior to the circimnagivation.

And with appropriate risk mitigation and support measures in place, he is confident that she’s more than capable of completing this epic voyage.

The full story of finding and fitting out MV Astra, as well as the ongoing progress of Iain and the team, is being published in a new series of MBY features.

We have already covered the purchase, refit and departure of MV Astra, and there are plenty more amazing stories still to come…