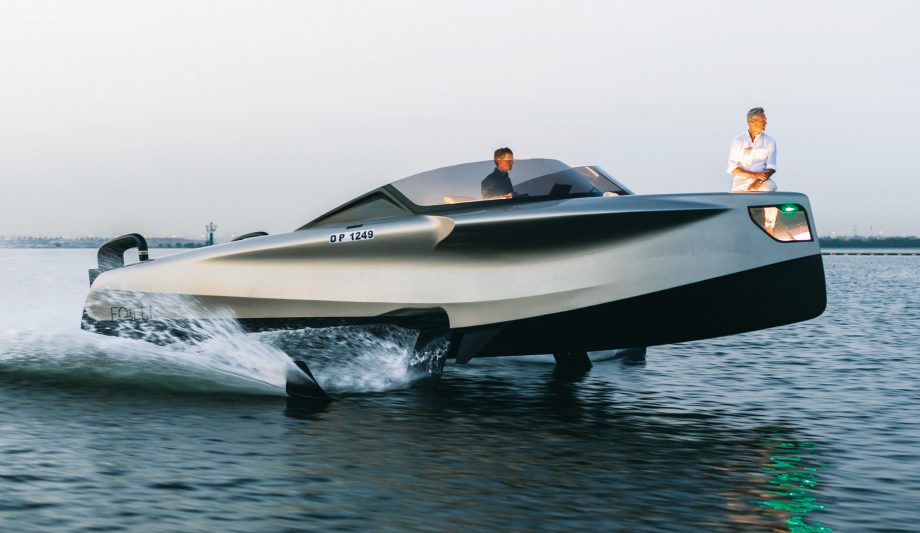 Enata Marine has developed a new propulsion and control system for its radical foiling superboat, the Foiler.

The original carbon-fibre craft was launched last year with a complex hybrid drivetrain based around a pair of BMW car engines. These generated electrical power for the two electric motors mounted on slender pods that lifted and lowered in sync with the retractable foils.

The latest version uses a pair of inboard 370hp V8 marine diesels to transmit hydraulic power to two torpedo-shaped hydraulic motors fitted to the aft foil. The new set up is expected to be more efficient and reliable than the previous arrangement. As well as the new drivetrain, the remodelled boat features a dual helm set-up that allows it to be piloted from the bow as well as the cockpit.

A joystick fitted to one side of the bow allows the helmsman to control the boat from here to fully appreciate the sensation of flying 1.5 metres above the water. Pushing the joystick forward increases speed, while left and right control direction. A small bow window enhances the foiling experience.

Enata Marine explains that the Foiler, which can carry a crew of 8 (7 plus the driver), rises 1.5m onto its foils at speeds above 18 knots and is capable of gliding across wave heights of up to 2m. The company adds that the boat is extremely quiet in flight as the waves pass below the hull with its slim foils offering low penetration, and that is it so stable that passengers can move easily around whilst the boat is foiling.

It also says that by reducing wave impact, the system ‘virtually eliminates sea sickness’ as well as leaving a third of the normal wake disturbance of a boat of this size and speed. Fuel consumption is also claimed to be reduced by 20%.

Top speed is 40 knots with a 30 knot cruising speed giving a range of 130 nautical miles from its 300 litre fuel tank.

On board, the deck layout is an open plan bow rider configuration, with two forward facing comfortable looking arm chairs in the bow section. Further aft, a large seating pad to port curls around a central bolster whilst the back end of the cockpit is left completely open for sunbathing or water sports.

The foils can be retracted, reducing draught to just 0.6m (2ft) and allowing the boat to be used as a superyacht tender and stored on board of very large yachts.