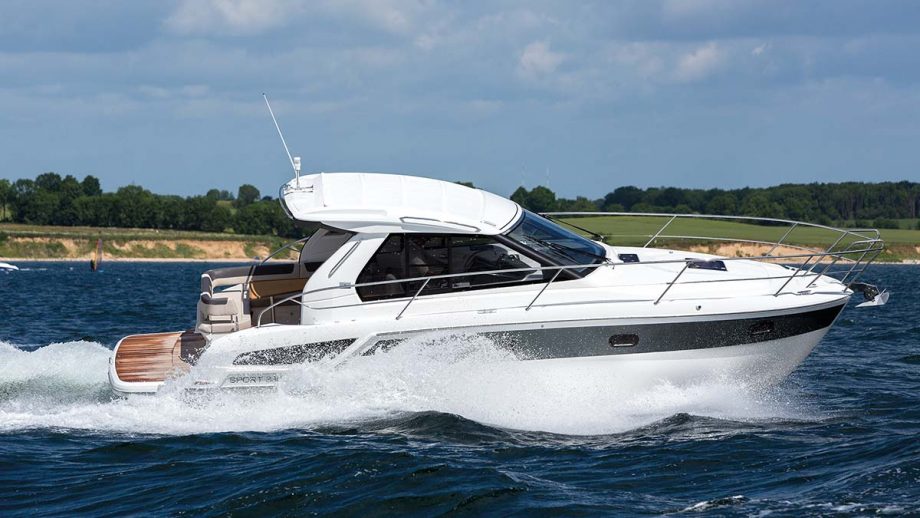 What do you get if you cross a joiner with a yacht broker? Answer: a boat builder. At least that’s what happened in 1978 when window maker Winfried Herman joined forces with charter agent Josef Meltl to create Bavaria Yachtbau.

By 2006, a year before the founders sold the business to a US private equity investor, their burgeoning company had built 3,500 sail and motor boats and was employing 600 people.

Things then took a turn for the worse, but despite filing for bankruptcy in 2018 and subsequently being acquired at the eleventh hour by a second private equity firm, Bavaria Yachtbau rose again and today is one of Europe’s biggest boat manufacturers, with the largest yard in Germany.

The Bavaria S33 HT is a prime example of what it does best – building stylish, spacious but also affordable craft that buyers of all ages and experience can aspire to.

Launched in 2015 as the Bavaria S330, and available in either open or hardtop format, it was rebadged S33 from the 2017 model year onwards. Production is still ongoing with an estimated 400 examples delivered to date.

Bavaria’s offer starts with a temptingly priced entry-level model to which a wide range of options can be added, so prospective purchasers of used examples shouldn’t take it for granted that something they’ve seen on one boat will be fitted to another.

That aside, all S33s boast the same no-nonsense build quality Bavaria is known for and, even with a raft of options added, should still represent good value for money.

According to Ben Nichols of UK Bavaria importer Clipper Marine, the S33 makes an ideal boat both for a relative newcomer who wants something a little larger than a run-of-the-mill 20ft cuddy cruiser, and for a more experienced owner who is looking to take the next step up from a RIB or sportsboat.

You can expect cruising economy of around 2.3 litres per nautical mile at 27 knots

Richard Cassidy, owner of the hard-topped Bavaria S33 HT featured here, which is being offered by Clipper Marine for £189,950, agrees, citing space and seakeeping as two of its key selling points.

“Being a first-time boat buyer, I had done a lot of research on the different makes and models of craft available within my budget,” says Richard. “It became clear to me that the best-value vessel would be one of the Bavarias. Firstly, they always seemed to be a more spacious option than other boats I had viewed within my price bracket.

“The Bavaria S33 HT ticked the boxes in terms of size, accommodation and space all round – and I have a family of four kids, so space was really key for me. Secondly, the boat has very well laid out cabins and helm, and there’s ample room to move around the side decks, stern and bow area.

“And thirdly, I live in the Isle of Man and would be taking her out in the Irish Sea and down as far as the West Country, so I needed a boat that offered the seafaring capabilities such trips would demand in terms of range, handling and economy.”

To deliver that broad mix of requirements while keeping the entry price as low as possible, the Bavaria S33 HT was offered with a wide range of different engine options. By far the most popular option in the UK was twin 220hp Volvo D3 diesels, as fitted to Richard’s boat.

The alternative diesel offering was a single Volvo D6 380hp. Although it offered a similar level of performance and marginally lower running costs, it never proved popular among British buyers.

There were also a number of petrol options, ranging from a single 350hp Volvo V8 (the cheapest engine choice) up to twin 250hp Mercurys or twin 300hp Volvos (the fastest). When MBY tested a Bavaria Sport 330 equipped with a pair of the D3 220s back in 2015, we found the boat pulled well all the way up to its top speed of 34.8 knots.

In terms of economy, cruising at a shade over 27 knots the engines consumed 70 lph, equating to a running cost of £110/hour at current prices. That figure halves when employing the “50% at cruising speed, 50% at slow speed” calculation we use in these reports.

To get a flavour of the boat’s seakeeping, we asked Richard Cassidy what’s the worst weather he’s been out in: “I’ve been caught out a few times in inclement weather with the S33,” he replied.

“The first instance was around the ‘corner of England’ at Land’s End, coming up past the Longships Lighthouse, where the English Channel becomes the Irish Sea and meets the Atlantic Ocean.

“The swell was estimated at 3-4m with winds of F3/F4 but she handled it brilliantly. The bow stayed where I needed it to be, the engines powered me forward when required and held me back when I needed to ride out the waves and meander through.

“But the last and easily most hair-raising time was off the coast of the Isle of Man, heading from Douglas Head to Peel Harbour via the south of the island. I hit a swell of 5m by Chicken Rock, where the wind had picked up from F3/4 to a solid F6. I had waves coming from the southwest at 5m high.

The hard top strikes the ideal balance between protection and openness

“There really was no direction of safety other than into the oncoming sea. I had to battle it out, then ride back in. It was then ‘rinse and repeat’ until I made it around the island!

“The Bavaria S33 HT is rated up to an F8 and, boy, did I test that claim on that passage! There were some very hairy moments with a number of huge waves causing me to dip the bow into the sea but she remained very stable, albeit a touch bumpy at times.

“I’d say the D3 220s are the minimum I would want in more challenging conditions, so all in all, she’s turned out to be the perfect balance of size and power for what I’ve needed.

“My only gripe on handling has been at slower speeds, when you have her down to six knots or less, where it can become quite tough to maintain a constant bow position.

“You can be forced to use the bow thruster far more than you’d really like to. The previous owner fitted a stern thruster to my boat, which has got me out of some very tricky situations; in my opinion, that should come as standard.”

According to MBY’s original reviewer, the early test boat was rather noisy, with our tester branding the D3s as “chatty little motors” which produced 90 decibels at ten knots and readings in the high 80s at cruising speed.

That said, Ben assures us that the factory improved the sound insulation on subsequent production models so it shouldn’t be an issue on used examples. Richard’s Bavaria S33 HT features Bavaria’s extended bathing platform and has a generously proportioned aft cockpit to match.

Its rear and portside wraparound seating unit comfortably accommodates six, while to starboard a moulded-in wet bar provides room for a sink, optional barbecue and fridge. Although open at the rear, the cockpit can be sealed against the elements with a complete set of canopy covers.

Up until 2019, these were sourced in the UK, meaning they could be individually tailored in terms of colours and window configuration so again, they can differ from boat to boat. Up at the helm, there is a supportive and adjustable seat with bolster and a clearly laid out array of predominantly analogue dials.

Opposite is a second L-shaped seating area large enough for 2-3 passengers. Covering this entire forward end of the cockpit is a sturdy hard top with a large manual fabric sunroof, which tucks away out of sight at the rear of its housing when open.

This has to be one of the S33 HT’s biggest plus points, providing protection from the sun, wind and rain when needed but opening up to give the feel of an open sportscruiser when conditions allow.

A central companionway leads down to the lower saloon and accommodation. The forward half of the lower deck is open plan. It features a dinette and galley at the foot of the stairs, leading to a permanent double berth in the forepeak, which is separated from the saloon by a curtain.

The galley is a good size and well equipped with a two-burner gas hob and integrated microwave oven. For a 33ft boat the space, light and headroom down here are admirable, helped by light coloured woodwork that is as practical as it is attractive.

Further aft is a separate double cabin amidships, which runs under the cockpit, plus a wetroom-style heads compartment, comprising a toilet, sink and shower. Although this lacks the luxury of a separate shower stall, combining all three into a single compartment does make it feel surprisingly spacious.

This is perhaps the defining characteristic of the Bavaria S33 HT. It has the ability to feel consistently bigger than its modest dimensions suggest but it does so without the associated hike in price, running costs and hassle that a larger boat brings.

Backed up by decent build quality, seakeeping and performance, it makes for a compelling package that, as Ben and Richard both suggested, would make a sound choice of
boat for first or second timers.

The galley is well sized, fully equipped and blessed with plenty of light and headroom

The Bavaria Sport powerboat range has built itself a solid reputation for good-value, fast and efficient sportscruisers. I have surveyed several over the years and have found few areas of major concern.

The hull form on these craft is variable-vee and the outdrive powertrain provides efficient planing performance but also agile turning and grip. Points to note when considering buying:

What’s on the market?

First published in the December 2022 issue of MBY.