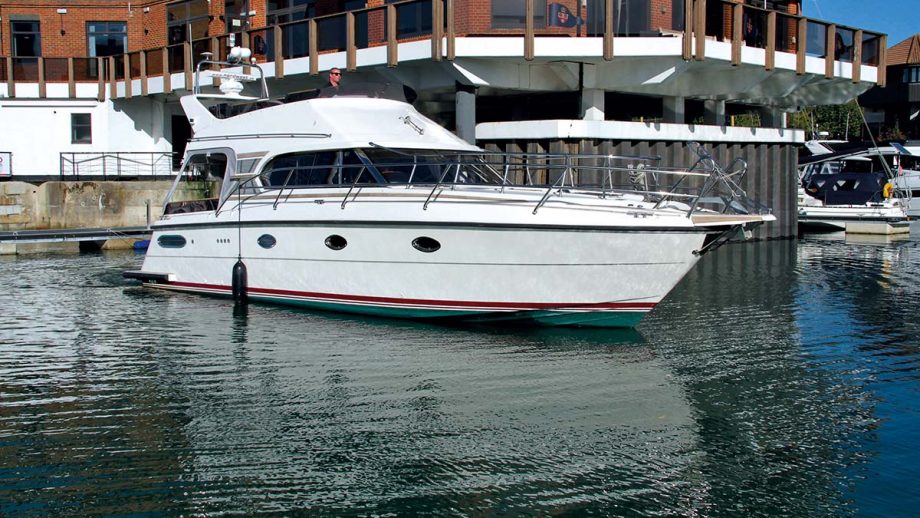 Nord West began building boats near Orust, Sweden in 1985, and for many years enjoyed great success with its range of beautifully built and thoughtfully designed sportscruiser and flybridge models from 27ft to 56ft.

The Nord West 390 was a fine example of the breed. Built between 2000 and 2007, the company produced 171 examples of this 39ft 1in motor cruiser in both flybridge and coupé guises.

Unfortunately, in 2013, a year after the company had acquired the sail boat brand Najad yachts, the company was placed into administration, blaming the high value of the Swedish krona for killing export sales.

Najad survived and still builds yachts to this day but to the disappointment of its many fans, the Nord West range never re-emerged.

According to Harvey Bowden, owner of the three-cabin, single-heads Nord West 390 Flybridge featured here, one of the reasons for the firm’s demise was due to precisely the same factor which gave it its edge: quality.

“Their boats were built like they should be; absolutely top class,” he says. “Unfortunately, though, the owners were too quality driven – they may not have been very good businessmen but they were great boatbuilders!”

Harvey has owned his Nord West 390 from new. Fourteen years on, it is being offered for sale at £199,950 by Approved Boats, Southampton. Harvey and his wife Ann are parting with the vessel because they are now retired and their children have grown up.

“We just don’t use it any more,” he says. But back in the day, the boat was worked hard: “As well as enjoying it with the family, I used it as the base for my sailing and racing. I used to race a Firebird catamaran and the 390 was the mothership – it would follow me round the Isle of Wight and rescue me when I capsized!”

Harvey’s racing exploits meant he would sometimes live aboard for extended periods, for which the Nord West 390 is ideally suited. “Me and my crew would sleep on the boat for a week or 10 days at a time, no problem,” he says.

In fact, Harvey had established the vessel’s suitability for long stays aboard and lengthy sea passages right from the very off. “When I bought it, I asked Nord West if they would ship it over,” he recalls. “But they said, why don’t you and Ann come here and bring it back yourselves?

“They assured me everything would be fine, so we travelled to their base in Vindön in Sweden, collected the boat, anchored up round the corner overnight to check everything over, then set sail for England the following day.

“The next two weeks turned into one of the most glorious holidays we’ve ever had – the boat was faultless.”

Another factor which attracted Harvey to the Nord West 390 was that it was the largest flybridge cruiser available at the time which could be specified with outdrives instead of shafts. The boat was to be based at Looe, which dries to sand, meaning lifting legs would be a real bonus.

This one has sterndrives fitted but shafts were also an option

But, as we discovered when we tested a Nord West 390 Flybridge in March 2005, the sterndrives offered other benefits too; namely great handling and improved efficiency.

“Once you’ve tried the outdrive boat you won’t want to consider the extra cost of shafts… the boat tracks straight and true, and for lower speeds and close-quarters manoeuvring the difference compared to shafts is tiny,” we wrote at the time.

Various engine options were available on the Nord West 390, including Volvo Penta D6s rated at either 310hp or 350hp, the latter of which were fitted to our original test boat.

Even the helm station is awash with teak, although the nav gear may need updating

On the day these delivered a top speed of 35.4 knots at 3,400rpm. The slippery sterndrives also meant it was unusually efficient at speed, in fact its most efficient cruising speed on test was 31.5 knots when it was burning 3.3 litres per nautical mile (103lph) for a range of 273nm from its 980-litre tank.

In old money that works out at 1.59mpg, an excellent result for a boat with a light displacement weight of 9.7 tonnes. According to Harvey, the boat’s seakeeping is as exceptional as its fuel economy.

“It’s one of the few boats that gets on the plane easily,” he says. “You don’t get any of that horrible ‘nose up in the air’ business. When you get to around 11 knots she’s starting to plane and by 14 the bow’s only gone up a couple of degrees.

“Over 18 you’re planing very comfortably and we generally cruise at 22. That is its comfortable, economic speed but she will do up to 38 knots maximum speed.

“You can also put the boat on its ear and go lock-to-lock with total confidence. Another thing is that she won’t slam – you can pound it without everything rattling and the doors falling off!”

An inspection of those doors shows that even if the boat had slammed they would probably have remained in place, for the quality of their construction and fitment is outstanding in every respect.

Starboard galley is both practical and well equipped with a gas hob, oven and fridge

That theme of quality is something which runs throughout the entire boat, touching every cupboard, cabinet, fixture, fitting and everything else. Much like the built-from-granite feel of Saab cars – another late, lamented Swedish brand – the Nord West 390 feels wonderfully robust.

In terms of living spaces, the 390 has plenty to offer, and in considerable style too. Starting at the top, the relatively compact flybridge has room for an L-shaped seating area aft and a neat table with four fold-out leaves that the helm seats can swivel to face.

The table on our review boat had been left out in the sun a little too much but it was nothing that a rub down and coat of varnish wouldn’t cure. Ahead of this are the comfortable bolstered helm and navigator’s seats with a full set of controls bordered by sturdy wooden drinks holders.

The rather steep six-step ladder up to the flybridge might prove a little off-putting for young and old alike but it does free up more space in the cockpit and allow more light into the saloon than a chunkier staircase.

The aft cockpit stretches across the full beam of the boat with two engine hatches (normally manually lifted but converted to electric operation on Harvey’s boat) and bags of space for a free-standing table and chairs in addition to the built-in bench along the port side.

For easy stern-to berthing, our review boat was equipped with an extra docking station to starboard, which was fitted by Nord West at Harvey’s request.

The aft cockpit also provides the entry point for the side decks and here is our only real criticism as access involves stepping up and out onto a narrow section of unprotected side deck. Once there, however, it’s just a short step forward to the side guard rails and handholds on the top edge of the saloon.

For additional security, Harvey’s boat also has an inner guard rail mounted around the foredeck. This is not a Nord West option and was custom built to his own specification.

Entry to the saloon is via a set of sliding patio doors. Inside, the quality feel is once again immediately apparent with a deep buttoned leather settee wrapping itself around a beautifully crafted table with a single drop-leaf.

In common with all the woodwork, the table is made of teak giving the interior a warm and inviting glow. Further enhancing the homely feeling, our review boat was carpeted throughout.

Opposite the dinette is a comprehensively equipped galley with two- burner hob, oven, fridge, one-and-a-half bowl sink and ample worktop and storage space. Once again, the galley drawers and cupboards are sturdily constructed from teak – this is clearly a boat built to last.

Two steps down from the saloon are the three cabins and single shared bathroom. The master cabin has a centrally mounted double bed with lockers above and below and storage units on either side at the foot.

The second cabin also has a double bed, together with a settee and a sideboard unit which features a natty built-in glass holder and flip-up table in addition to the usual lockers and drawers.

The larger of the two compact but cosy guest cabins. The third one is open to the lobby

Cabin three is more of a bolthole than a cabin, with no door and limited headroom over the bed, so we suspect it may end up being used as an extra store room much of the time.

On that note, it’s worth pointing out that the Nord West 390 has more lockers, drawers, cupboards and cubby holes than any other 40ft boat we can think of – we counted 40 before giving up!

It’s yet another example of how its builders went the extra mile to ensure not an inch of space has been allowed to go to waste. It may have ended up costing the company dear but for Nord West owners past, present and future, it’s one of its many endearing assets.

The Nord West range is relatively rare here in the UK but once you have been on board a good example, you cannot help but be impressed by the quality of build and level of detail.

These boats were expensive in their day but you can see where the money has gone the minute you step aboard. From a distance, it is a very traditional-looking flybridge boat but behind the scenes, the detail in engineering, design and finish is a pleasure to see.

Points to note when considering buying:

A well-maintained example will be a reassuring and enjoyable boat that should survive the test of time.

What’s on the market?

First published in the January 2023 issue of MBY.