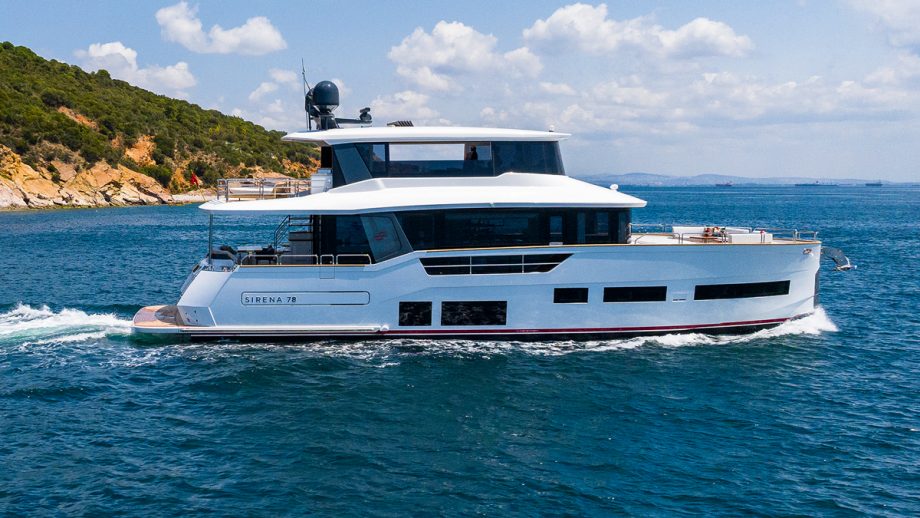 The explosion in crossover craft means you no longer have to choose between a trawler, flybridge or trideck craft, you can have all three in one, but is the resulting design cohesive or confusing? Hugo takes a test drive of the Sirena 78 to find out...

Not so long ago, buyers looking for a 60-80ft motor boat had a fairly simple choice to make. You just needed to decide whether you wanted a flybridge, a sportscruiser or a trawler yacht, and then pick from the half a dozen or so well established boat brands that built them. Job done.

These days, the sheer variety of choice on offer makes things rather trickier. Not only have the categories evolved to include sportsyachts, navettas, swift trawlers, adventure boats and countless other crossover craft, but the number of yards building them has increased exponentially too.

Sirena is a perfect case in point. Prior to 2017, very few people outside the industry had even heard of the Turkish manufacturer, which until that point had largely stayed in
the shadows, building boats for other brands.

But then it launched its own range of motor boats and in the five short years since then, it has grown to become a serious player in its own right. Its high-quality, high-volume cruising craft defy easy categorisation.

On the other hand, with their voluminous cabins, big hull windows, cutting edge interiors and 25-30-knot performance, they have just as much in common with modern flybridge boats.

As if that wasn’t enough, its latest model, the all-new Sirena 78, takes things to another level – literally. Thanks to a top deck that can be left open, semi-enclosed or fully enclosed, it is effectively available as a tri-deck yacht, a conventional two-deck flybridge boat with a hard top or something in between.

Once you’ve settled on which of these variants you want, you then get to decide between multiple interior layout options and three different design themes.

Read Hugo’s full review of the Sirena 78 in the January 2023 issue of MBY, which is out now.