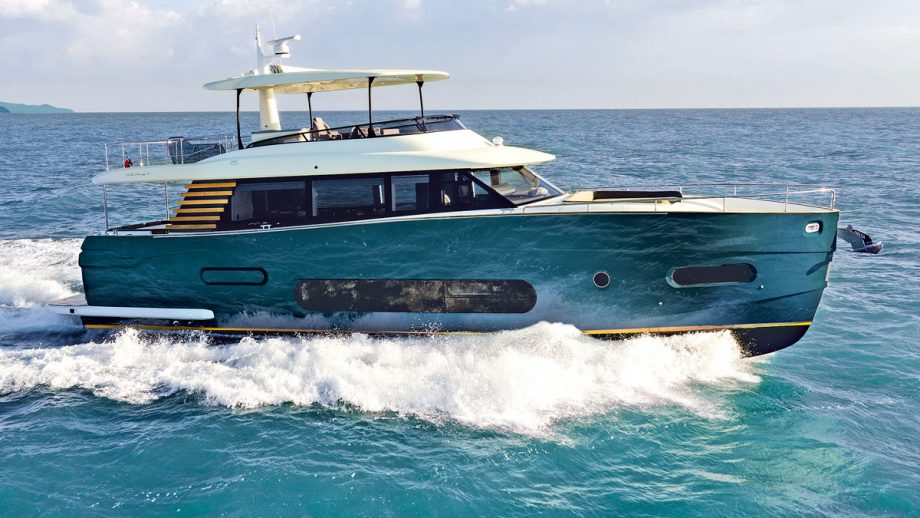 Reporting from the 2022 Cannes Yachting Festival, Motor Boat & Yachting editor Hugo Andreae takes us on a full tour of the Azimut Magellano 66.

Azimut’s relentless shift upmarket into ever larger boats means this new Azimut Magellano 66 is currently the entry point of its navetta-style cruising range, although a smaller Magellano 58 is on the cards for next year.

In the meantime the Magellano 66 is the stepping stone up to the Azimut Grande 25M and 30M models, a task it carries off with considerable aplomb.

If you thought all trawler yachts were spartan cruising machines that traded style for practicality, think again – the Azimut Magellano 66 does a fine job of delivering both.

Thanks to a vertical bow and transom, the waterline length is almost as long as its LOA, helping to deliver plenty of internal volume and efficient cruising at a wide range of speeds.

Its unusual dual mode hull is said to be as happy cruising at 12 knots as it is 22 knots, leading to a claimed 20% fuel saving over a conventional planing hull between 15 and 22 knots.

The long aft cockpit with a square shaped dinette is linked to another large foredeck lounge via broad, high bulwarked side decks that make it extremely safe to move around.

This does make the long saloon and dining area feel a little narrower than an equivalent 66ft flybridge boat but big side windows make up for it with fine
views out all round.

The forward galley and helm can either be left open to create an open plan main deck or closed off, navetta style, on crewed vessels.

With four cabins and three bathrooms below decks in addition to a fairly decent ensuite crew cabin in the stern, there is plenty of sleeping space on board while still leaving room for a full-height engine room amidships to house the twin 850hp MAN engines on vee-drive shafts.

But arguably the biggest luxury is the vast flybridge which stretches back to the transom and includes a shower built into the hard top and a fully equipped wet bar, among other things.