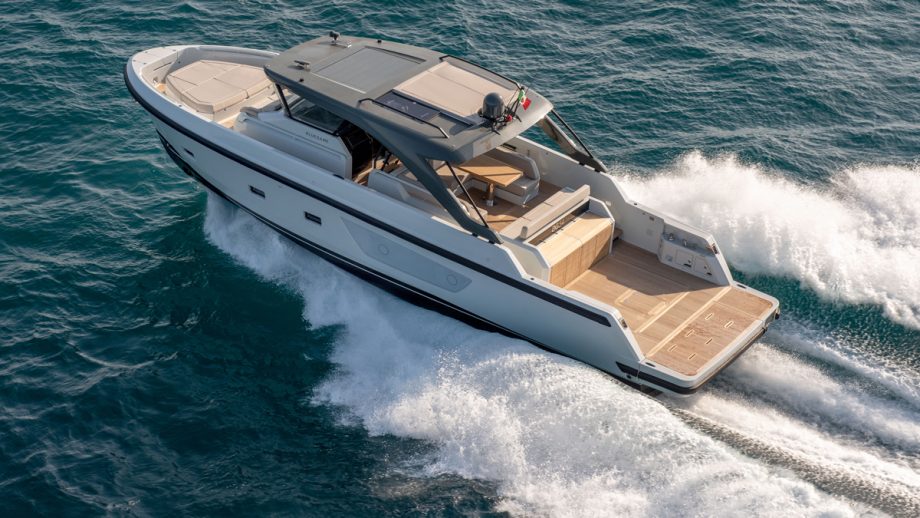 Back in the February 2022 edition of the magazine we tested – and were blown away by – this boat’s big sister, the Bluegame BG72, its amazing layout and long-legged cruising ability was enough to really shake up the 70ft sector.

If that boat was a breath of fresh air in that sector then the Bluegame BG54, by distilling that innovation into a 55-footer, is like heaving in a great lungful of the Swiss Alps’ finest.

There isn’t enough height to work with to have the aft deck leading into the interior, as is the case on the BG72, but the Bluegame BG54 still has the sprawling and totally flat beach club area that extends the living space right to the water’s edge.

Stow toys, lay down sun loungers or leave it empty, this is a brilliantly versatile space served by an almost full beam wet bar that is well stocked to keep everyone fed and watered all day long.

Steps up either side lead to the raised cockpit, which has a big dinette split by a walkway, and being in an elevated position is far more private than most cockpits when berthed stern to the quayside.

Single-level walkaround decks lead from here all the way to the foredeck, which has a sofa below the steeply raked windscreen as well as a raised four-person sun pad.

The interior is well proportioned and boasts staggering headroom throughout with two double cabins as standard – the midships owner’s cabin being ensuite.

The latter can be specified as two separate doubles if you need more beds. It’s functional and well equipped for long stays on board but still sizzles with Italian style.

Like its big sister, fast cruising is the name of the game on the Bluegame BG54, so a cruising speed of 30 knots isn’t out of the question.