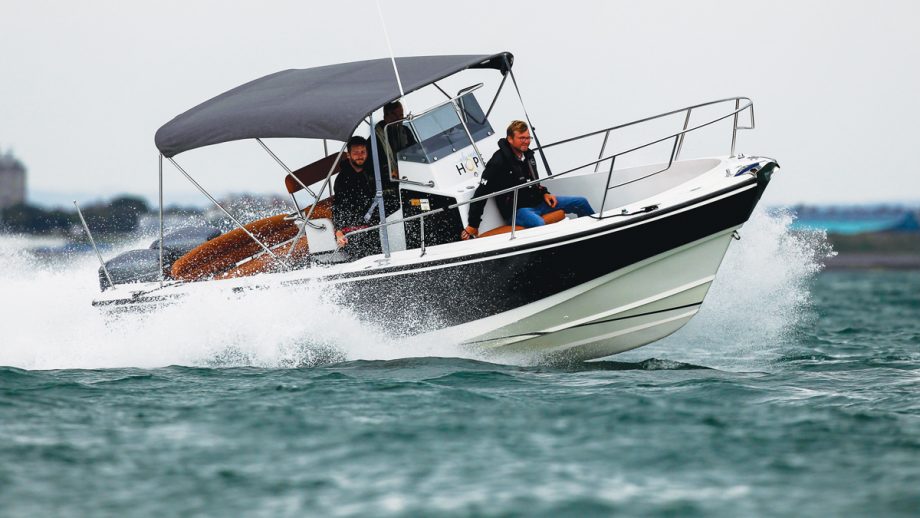 The hunt for an affordable sportsboat that could be towed behind a Land Rover led Ben Metcalf to a £15,000 Boston Whaler Outrage in need of a serious refresh…

“Buying another boat was never part of my plan,” explains Ben Metcalf. “I’d only just sold the last one – a 30ft twin engined Jeanneau Cap Camarat 925 – because I didn’t use it enough to justify the running costs. But as soon as it was gone, I missed not having a boat.

“I signed up to a couple of online brokerage sites just to see what I could find. My thinking was that if I bought an older, cheaper boat that was small enough to keep on a trailer then it wouldn’t cost me as much to run, I wouldn’t feel so guilty when I was too busy to use it and I could tow it behind my Land Rover to explore new cruising destinations that were too far or too expensive to get to in my previous boat.

“I wasn’t looking for any particular make or model. As long as the hull was sound and the engine was serviceable, I was confident I could sort out the rest of it.

“I’m in the refit business anyway (I’m MD of Landau UK) so although I’d be paying for work on this boat out of my own pocket, I would at least have a pretty good idea of what needed doing and how much it was likely to cost.

A top speed of just under 40knots and good pick up from standstill make the boat fun to drive. Credit: Boston Whaler

“As my office is based in Swanwick I went to have a chat with the brokerage team at Princess Motor Yacht Sales just in case they came across anything that fitted the bill. As it happened they’d just taken a rather tired-looking 1996 Boston Whaler Outrage 24 in part exchange against another boat.

“It was too small to suit their normal customer base so they’d passed it onto Clipper Marine to sell instead. It was priced bang on my budget at £15,000 and judging from the photos it appeared to be in reasonable condition so I went straight over to view it.”

Read the full story of Ben’s Boston Whaler Outrage 24 refit in the February issue of MBY, which is out now.