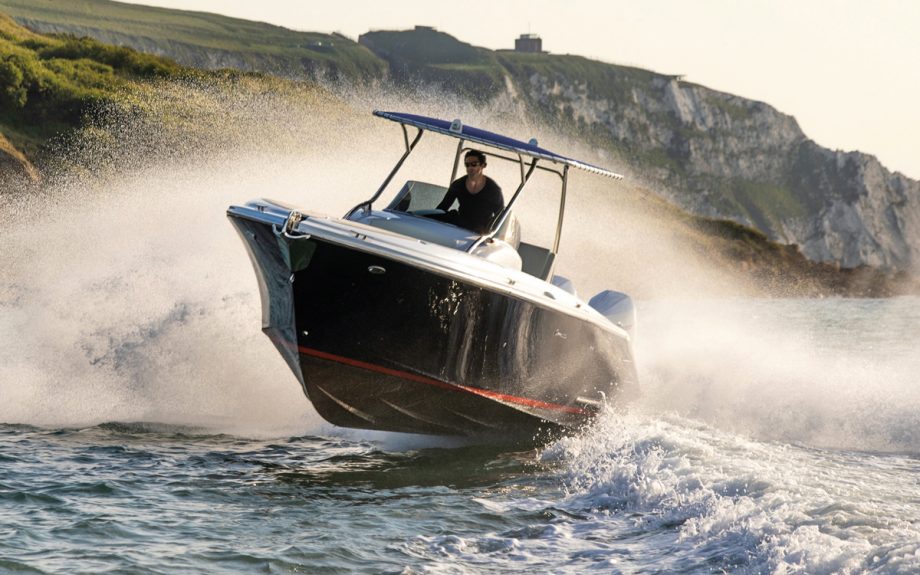 At the recent Southampton Boat Show, MBY deputy editor Jack Haines took the chance to tour the Committi Isola 33, which was making its global debut.

The Comitti Isola 33, alongside its Breva 35 sibling, made up the prettiest corner of this year’s Southampton Boat Show and while the Breva is all sumptuous lines and graceful curves, the Isola is an altogether more practical proposition.

Think of it as a Boston Whaler in an Armani suit. It’s still a beautiful thing to behold, with a slender, sub-3m beam and a glorious gentle flare to the bow but with deep walkaround decks, plentiful storage and an incredible choice of engines, this is not some form-over- function show piece but a craft that you can do some serious boating on.

There are no less than 17 engine options from twin Mercury outboards to single and twin petrol or diesel inboards by Volvo and Mercury. The boat at the show had twin 300hp Mercury outboards, which is likely to be a popular choice.

Not being a mass production yard, there is a fair amount of flexibility regarding the layout of the deck, but the dinette and wet-bar combo of the show boat worked well, with a beautifully constructed tubular stainless steel T-top providing some shelter over the three-person helm console.

The bow area is deep and well-protected and can be set up either as a mini dinette with a small table for drinks and snacks or you can drop the table down and with the addition of some cushions transform the space into a sunken and very inviting day bed.

Opposite, an electric hatch in the console powers up to reveal a large and attractively trimmed heads compartment with a decent amount of storage, a toilet and sink with enough space for guests to change out of wet gear in private.

It’s not cheap but it’s a stunning machine and as exclusive as they come.